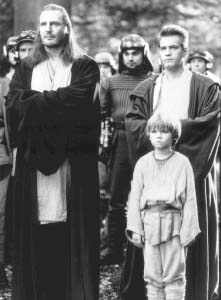 Episode I defines the background and sets the stage for the next two episodes which will connect to the original Star Wars. Introducing the characters thirty years before and explaining the how and why they end up as they do at the end of episode VI, is more complex and less clear then the obvious evil versus good which was the hallmark of the original Star Wars. Phantom Menace offers enhanced special effects and digital characters which were not available in the past.  Armies of robotic soldiers replace the white storm troopers who have yet to be born.

Battling occurs for the most part on the planet Naboo which is lead by Queen Amidala (Natalie Postman).  She pleads for help before a weak senate asking them to step in and stop the Trade Federation which is about to attack Nabob with enormous force.  Her emissaries Jedi Master, Qui-Gon Jinn (Liam Neeson) and his apprentice, Obi-Wan Kenobi (Ewan McGregor) are forced to escape capture.  On their return route Qui-Gon discovers a young boy, Anakin Skywalker (Jake Lloyd), who is a slave on the desert planet Tatooine.  We all know Anakin, they call him Annie, will become the evil Darth Vader.  The challenge and part of the enticement to see this episode more than once is to watch for clues to the success and degeneration into evil which Anakin will follow.  It's difficult not to see young Charles Foster Kane leaving his mother for what she believes will be a better life and young Anakin leaving his mother for what we know will be a similar fate, great success and eventual failure to the dark side. Obi-Wan and Qui-Gon insist he become a Jedi Knight over the objections of Yoda who has apprehensions about Anakin's lineage.

New exotic characters are introduced.  Jar Jar Binks, a Gungan, is the bumbling idiot who continues to trip and fall at what ever he does. He's on screen a little too much.  His underwater civilization is headed by Boss Nass, who looks like Robert Morley as Jaba looks like Sidney Greenstreet.

Technical achievements are spectacular and the development of the characters moves sufficiently to create interest in answering questions such as how will Anakin and Queen Amidala get together to create Luke and Leia?  How does Luke end up with his aunt and uncle on Tatooine and where do these relatives come from?  Who is Anakin's father, how did Anakin get the excessive gene which will cause his metamorphosis to the dark side?  How do Luke and Leia become separated?  Where is Queen Amidala when episode IV starts?

We know at the end of Episode I, the seeds of destruction and surrender are in place, Senator Palpatine has taken control of the council and all the main characters are on Naboo. It's the galactic  journey we have to look forward to.

The Phantom Menace tantalizes, explains and invites everyone back for more.