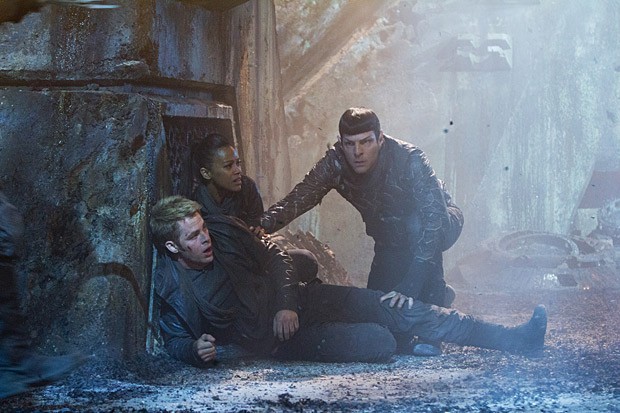 
J.J Abrams' reinvention of the Gene Roddenberry universe continues to move boldly where most haven't gone before; even if this latest wild sci-fi adventure doesn't have the bounce or shadowy depth of its origin tale.

There's problems for Capt. Kirk (Pine) again when not following the Prime Directive, losing his command as First Officer Spock (Quinto, known of late for his work on unnerving small-screen endeavors like American Horror Story: Asylum) is moved away by Starfleet command.

The scripting, mostly by Roberto Orci and Alex Kurtzman, involves an attack by a powerful maniac John Harrison ( a layered Cumberbatch of War Horse, The Hobbit) that brings Kirk and Spock and the old Enterprise crew (including Saldana, Karl Urban, Simon Pegg, Anton Yelchin, and John Cho) to go after him. Yet, this may only be a small piece of a larger puzzle where more mysterious malevolent forces are at work.

Strangely enough the on-screen tension or sense of something great at stake may not be that tangible. However, there is illuminating vivacity with enough querulous interactions to make up for it, especially in a witty way. Peter Weller (remember The Adventures of Buckaroo Banzai) turns up as Adm. Marcus, a key figure in a mission which involves some amazing if dubious munitions. His scientist daughter Carol (Alice Eve of Men In Black 3, X-Men: First Class) insinuates herself among the crew to raise more than a few eyebrows, especially for Kirk.

An intimate enough feel is generated by Abrams and his craftspeople to compensated for the unnecessary now common 3D format. The connection of familiar characters to Roddenberry's vision (and offering wrinkles to them) is relevant according to crisp technical effectiveness to stay involves even during mischievousness. The comic relief from Urban and Pegg as "Bones" and Scott is well done, while Saldana brings alluring if conventional emotional tingling as the action heats up even beyond Uhura's tricky relationship with Spock. But, the main interplay of Kirk and Spock evinces a fine prickly flavor while Cumberbatch (Tinker Tailor Soldier Spy) distinguishes a wicked heavy.

This new Star Trek rewards from rewinding mindfully from the past and pleasantly thrusting forward even if moving Into Darkness is misleading and not always at the desired warp speed, but often breathtaking and affecting.