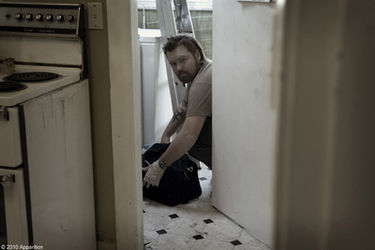 
This Australian import is stylish, taut, and twisty even when the filmmakers maybe play their cards sooner than expected. It would seem to make evidence for not straying from one's spouse even with all the passion on hot, humid nights.

The life of a married construction supervisor, Roberts' Ray, begins to unravel when his mistress Carla (van der Bloom) presents him with a bag of cash from her attic. Carla looks at the opportunity to have a life with Ray away from the dreary suburbs of Sydney.

In a storyline by Matthew Dabner and Joel Edgerton, the latter being the arsonist Billy retained by Ray to conceal the loss from Carla's bearish, petty criminal husband Smithy (Hayes), things become detrimental in a starkly naturalistic horrific cat-and-mouse manner.

Edgerton's brother Nash, a stuntman who coordinated stunts for the upcoming Knight and Day starring Tom Cruise and Cameron Diaz, uses the avarice and betrayal of flawed folks engaging in kickbacks and blackmail to create scenes filled with anxiety and apprehension. In a film occurring during Yuletide festivities, the first-timer behind the camera displays craftsmanship especially on pan and zoom shots in unveiling all kinds of transgressions.

He also gets the most out of two dogs, a poodle and a boxer, well-wrangled as they are vigilant around Ray and Carla in a grabbing opening scene in a parked car. As all the wrong-doing evocatively unfolds with mystery and spookiness as indicated by the editing and sonorous soundtrack, one of the canines displays his affections while swimming in a lake.

Some may have difficulty following the thick line-readings in certain passages as power-plays are being materialized in a credible depiction of working-class life down under. Roberts is a solid fulcrum as an everyman who strays outside of his "square" and has a noteworthy rapport with van der Bloom whose Carla is a beacon of hope. Decent backup of increasing quality is endowed from Lucy Bell as Ray's wife, Mangan Lawrence as Billy's sister Lily, and Paul Caesar as a police officer looking forward to a little work. Here's some adulterers with a simple plan that may be a tip of the hat to the likes of Sidney Lumet, Sam Raimi and The Coens with an often edgy, engrossing examination of the foreboding corners of human nature.