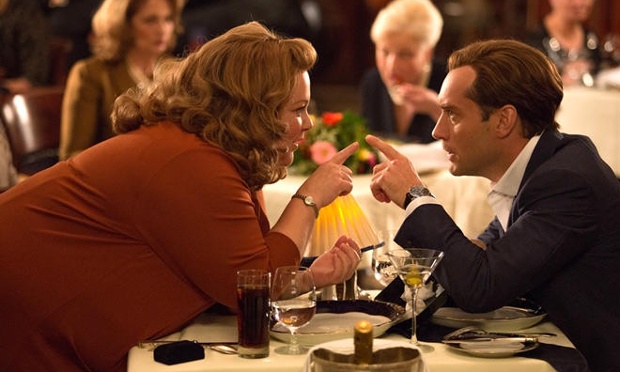 
Imagine my surprise when I expected to see another run-of-the-mill, laced with obscenities, silly comedy starring Melissa McCarthy.  Instead, I saw a smart, capable character (who also spewed obscenities, mind you) who could also be very funny.

She stars as Susan Cooper, a CIA analyst. She sits in an office and through an earpiece funnels important information to super spy Bradley Fine (Jude Law). She's secretly in love with him and when he needs to be replaced, she convinces her boss (Allison Janney) that she's the best one for the job.

Her mission is to follow a dangerous arms dealer, Rayna Boyanov (Rose Byrne) and report back to headquarters.  But, her training kicks in and she gets caught up in the chase.  Boyanov is trying to purchase a nuclear bomb and the action travels from Bulgaria to Paris and Rome.

The Agency sees her as an overweight, single dowdy woman, and they give Susan disguises to fit that persona.  She has an unattractive curly wig, a large tee shirt with a picture of a cat on the front and a purse full of personal items that transform into pepper spray and the like.  They certainly don't picture her as a gun-toting, hand to hand combat type.  But, that's exactly what she turns out to be - and there's a lot of fun along the way.

Susan can shoot, jump onto the landing gear of a moving helicopter and commandeer a motor scooter to chase down the bad guys - all the while spouting expletive-laden insults.

A terrific cast includes Miranda Hart as Susan's co-worker, Jason Statham is funny as an inept operative and Peter Serafinowicz as Aldo, a frisky Italian spy is a riot.

Another pairing with writer/director Paul Feig (Bridesmaids, The Heat) has turned out to be movie gold for McCarthy.  I laughed a lot and can't wait for their next collaboration.