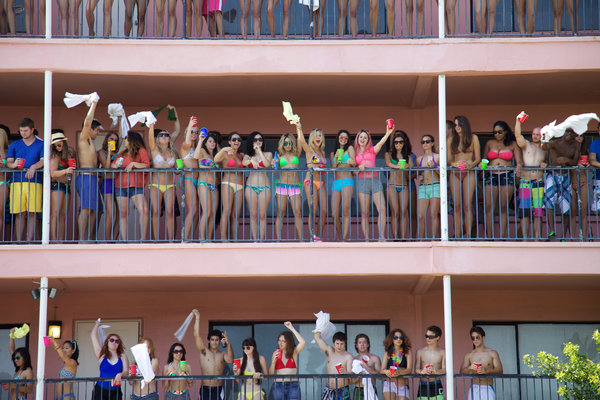 The writer of the controversial, improvisational Kids has the bored ennui of partying University students on his mind but has more satirical chutzpah in his rather striking though mostly plotless production than a low-minded mainstream effort like Project X.

He also plays off of the established screen images of Vanessa Hudgens and Selena Gomez as Candy and the more spiritually based Faith to tease with tactile passion off of the notion of Girls Gone Wild. But, the physicality and exploratory images of the early going hardly display any narrative flow or generate much interest.

With Cotty (Rachel Korine, the director's wife) and Brit (Ashley Benson), the beach-bound party-hopping gals find themselves nailed during a raid for narcotics, it's James Franco's Alien (sounds like a-leen) a vulgar, glittery, corn-rowed rapper on the criminal underbelly to complement a lush hued look and the haunting soundtrack provided by Cliff Martinez (Drive). Apparently, this nasty guy needs to stoke his bravado with these scantily clad eponymous ladies who've spent all their cash on drugs. Especially when it comes to his vicious foe (Gucci Mane).

In this mad universe or even films like Pineapple Express Franco puts together something more memorable from sleaze than as a transforming conniving magician in the Disney hit Oz: The Great and Powerful. Alien, with his cheap tattoos is quiet a damaged soul who earns laugh notably when doing a Britney Spears ballad poolside on a grand piano.

One wishes that Korine had something more incisive to tell, but maybe it's more evident in his alternative violent haze that strains through a mantra to connect beyond the obvious vacationing demographic. Yet, the crisp editing and the vivid visuals, as well as the offbeat antics of a game Franco shows a little more ambition when it comes to a more lucid, if explicit rendering of the kind of movies Connie Francis made over half a century ago.