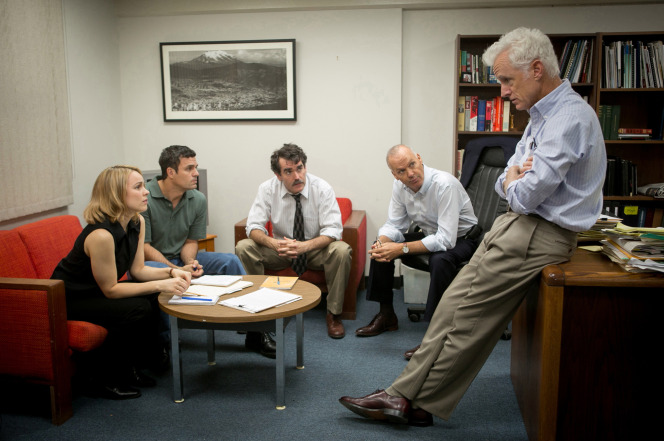 
An unabashed hardly overwrought look at the wrongdoings in Boston's Catholic Archdiocese is rivetingly cutthroat in Tom McCarthy's understated, damningly real-life trenchant Spotlight with a persuasive sense of time and place.

The local church in 2001 in strongly Catholic Beantown was allegedly connected to child abuse and the writer/director of films like The Visitor assimilates the implications in a broader descriptive complicity which covers many institutions, not just cleric in nature. So, based on the dissoluteness
around testimonials with the suffering there is a crucial, arresting clarity with tenebrous hues to elicit a consistently masterful humanistic expression, as was the case in All The President's Men.

McCarthy's nonchalant, fair-minded way with the material (an exactitude with hardly a paradigm) allows for a deeper look around the horrors surrounding men of the cloth in recent years (though the subject even goes back decades given the coverage on stage and screen of Doubt). No fancy flip-flopping narrative or flaunting lensing with Rachel McAdams (State of Play, A Most Wanted Man) and Mark Ruffalo (Foxcatcher, Avengers: Age of Ultron) as disparate beat Boston Globe reporters, Sacha and Michael. The latter's clamoring edginess contrasts with his Peter Falk stylings in David Fincher's eerily absorbing Zodiac (which delved into serial killing via the San Francisco Examiner), as well as the film itself.

Michael Keaton (a revelation in the 'one-take' wonder Birdman) gives native ebullient flair to the inquiring group's head, Robby Robinson while outsider new Jewish editor Marty Baron is another impressive supporting turn for Liev Schreiber (after the little seen biopic Pawn Sacrifice). John Slattery and Billy Crudup are among a cast where professions are predicated on work ethic, piety and respectability. This recurring sadness and turpitude rejects impetuousness in getting to the nooks and crannies to let the importance seep with verisimilitude around the mechanics of savvy and sensationalism. As the veteran attorney Mitchell Garabedian reiterates to a correspondent  (Stanley Tucci of the upcoming The Hunger Games: Mockingjay Pt. 2"as the flamboyant host Caesar Flickman) , This is Boston.