The Sponge Bob Movie - Sponge Out of Water 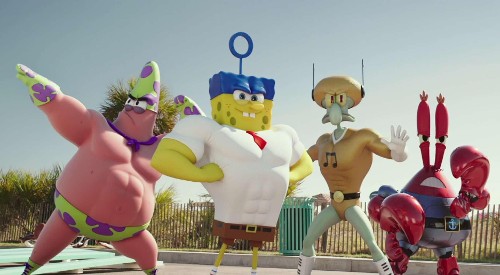 
Sponge Bob Out of Water  is a further adventure of Sponge Bob a simple minded, pure of heart living sponge who lives in a unique world on the bottom of the sea. In this adventure on the big screen and in 3D, Bob (Tom Kenny) with his buddies , Patrick, Sandy, Mr Krabs, Squidward and with unusual help from Plankton chase Burger Beard, the pirate (Antonio Banderas) over the sea into space, through out time, and on the beach to retrieve the secret formula for Krabby Patties which has been taken from Bikini Bottom.

Joining with Plankton they meet with Bubbies a Dolphin wizard guardian who sends them in the right direction to save the formula. It all twists and turns as the five pals chase the lost formula ending up on the beach were Burger Beard has opened a food truck which looks like a pirate ship.

The background places and characters are unimportant, sponge Bob and his friends spend their time spouting silly statements which are comical to adults while the frantic movements caused by various guns, locations and centrifugal force move the characters to the delight of the kids.

It takes a magical book with an entry from Sponge Bob to save the day and bring normalcy to Bikini Bottom.

Sponge Bob is not brilliant movie making or even serious animation, but listening to the kids laugh at the antics helps us to understand the value of Sponge Bob on film.