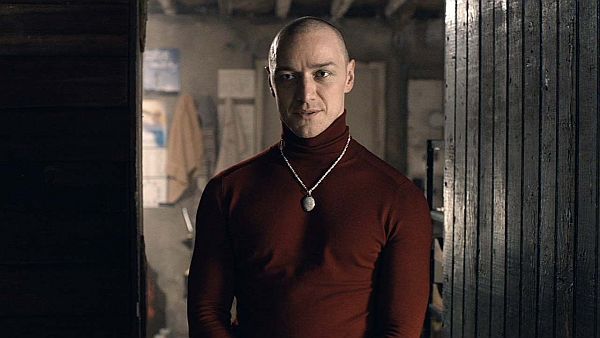 
Watching Split is like fishing in a pond where we can see the fish swimming all around in the water, but they don't bite, they periodically scramble and leap and when they do get caught the catch is a small shiner which is usually used for bait and serious disappointment.

Without a doubt James McAvoy brings a jolting powerful multi dimensional performance to the twenty-three characters which occupy his body.  A number of the personalities are being treated by Dr Karen Fletcher (Betty Buckley) who is wonderfully casts as a psychologist who delves into multiple personality clients.  She is known World wide and uses this case as an example when she appears in a national forum dealing with the problem.

M. Night Shyamalan directs in his usual style of bring thrills and questions to the screen concerning his characters.  McAvoy's characters move in and out of his mind and body and the dark side pushes him to kidnap three young women played by Jessica Sula, Haley Lu Richardson and Ann Taylor Joy who is the center of the action in this thriller.

Shyamalan weaves in sexual innuendo into the script as the Dennis character one of the multiples, requires the three girls to partially disrobe before him.  He wants them to dance for him.  Each of the girls tries to escape from what is clearly a basement of a large institution filled with heating and electrical conduits, long hall ways and a series of rooms which are locked and available for each of the captives to stay in.  The atmosphere adds to the captive enclosed atmosphere the girls find themselves in.

Anya Taylor-Joy caries most of the film from the captives point of view, thinking and plotting to find an escape route.  She is also shown as Casey a little girl played by Izzie Coffey who is taught by her father to use a shot gun, but is a sexual abuse victim at the hands of her uncle.

The danger and severe tension which Shyamalan brings to the screen holds our attention as we wonder what will happen to the young women and where will McAvoy's personalities end up but the buildup doesn't result in a clear ending.

The climatic scenes are violent but muted for a PG-13 rating.  They are effective, but don't leave us with any satisfaction or comfortable resolution.  Perhaps that where Shyamalan plan to leave us, but Casey deserves a better end than what she receives after her brave thoughtful battle will a crazy man.