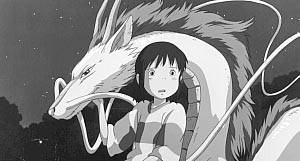 Just over two hours, Hayao Miyazaki's Spirited Away should have viewers swept away with its ambitiously wondrous hand-crafted anime.

Miyazaki is considered to be the Walt Disney in Japan and his magic is on the silver screen with an artistry that American animators like John Lasseter (Toy Story) and Kirk Wise (Beauty and the Beast) reverently make good on in this English language versions.

Stateside audiences may know the director's name from a couple of years ago with the involving, intense feudal fable Princess Mononoke.  Now, he becomes lyrical again but arguably with more beauty for the eyes as his amazing work relates to The Wizard of Oz and more directly to "Alice in Wonderland."

The lovely tale has Chihiro as its lead, a brave, spoiled 10-year-old, with endearing voicing provided by Daveigh Chase, the cute Hawaiian girl in Lilo & Stitch.

She's on her way to settling down anew with her parents.  But they end up in a ghost-town, and her parents strangely morph into repulsive bovines after they enjoy a unique entree.

The enchanting, sometimes mysterious Spirited Away, Japan's highest grossing film, concerns Chihiro's efforts to help her parents get home.  A pleasant mood is had throughout with Chihiro working in the park's bathhouse where millions of specters dwell.

In her amazing journey she is aided by a teenage boy, a physical chameleon named Haku (Jason Marsden), and a mature, rugged girl, Lin (Susan Egan).  The wicked witch who operates the bathhouse is Yubaba, voiced harshly by Suzanne Pleshette.  Kamaji (David Ogden Stiers) has six arms and is a commander of bugs from a furnace.

Miyazaki has plenty of outré figures in this delightful Disneyfied creation on celluloid.  Sequences featuring spirits on a train and a huge monster are thoughtful and entertaining.

There's nothing muted in the realization of Japanese culture raised to a masterful, mythological plateau.  For some, the English-dubbing of Spirited Away will tilt toward Western ideals.  Yet, the toon experience is embraced in a glory of love with kudos for Lasseter and Wise who let the uncomplicated sumptuous poetry in motion flow with its young spirited heroine.