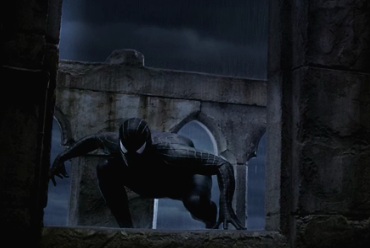 
The third, and maybe, final installment of this Marvel Comics blockbuster allows "Spider-Man" to show his true colors. Even though a new trilogy may come down the road with a new lineup.

This big-budgeted superhero franchise starring Tobey Maguire, Kirsten Dunst, and James Franco has plenty for fans of the comic book from Stan Lee (here in a cameo) and Steve Ditko, even those looking for an emotional outlet.

Technically, the visual effects sequences are at least equal if not greater than the previous entries, and will prove more astonishing on giant-formatted and IMAX screens.

In 3, as the poster show, an identity crisis emerges as Peter Parker, aka Spider-Man, faces more formidable villains than Doc Ock or the Green Goblin.

Topher Grace, best known for "That 70's Show", but very good in movies like In Good Company, is the upshot Eddie Brock, around Peter's age, and a rival for Spider-Man's picture at the Daily Bugle. He'll undergo a metamorphosis from an alien (black liquidy substance with strong binding properties) symbiote that makes Peter's more unhealthy aspects stand out.

Franco has his moments, notably at the beginning and end of the proceedings, as Harry Osborn has used some of the technology started by his deceased father - whose passing he has made Peter (revealed to many as Spider-Man in the previous thrilling chapter) the culprit.

Though Peter is getting along well at the start in his science studies things become complicated in his relationship with intended bride Mary Jane/MJ (Dunst) who loses her part in a stage production "Manhattan Memories" due to unanimous pundits. That occurs while Spider-Man is riding a sky-high approval rating in the Big Apple.

A classmate of Peter's, Gwen Stacy (a blonde Bryce Dallas Howard of The Lady in the Water), is the daughter of a police captain (James Cromwell), and desired by Eddie, and gives Spider-Man a public (upside down) kiss after saving her from an out-of-control crane.

The script by director Sam Raimi, Ivan Raimi, and Alvin Sargent is rather dense as one learns who was behind the death of Uncle Ben (Cliff Robertson, seen in some monochromatic flashbacks).

The importance of making choices and forgiveness is meshed prominently into the tangled web that interconnects all involved. Maguire, instead of losing his power the last time, gets to embrace a bad boy lifestyle, a madness that sound can only loosen. He does wear the dark suit well.

Less subtle and deep than Spider-Man 2, the propulsion still works from the conflict nicely endowed by Church and Grace, and huge set pieces from vehicles dangling and that whopper of a crane sequence. Dunst and Rosemary Harris's Aunt May are less effective, though there's still a chemistry even when MJ sings in a jazz club where she waitreses.