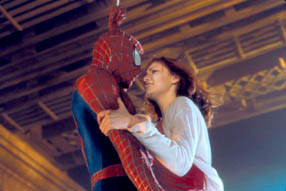 Tobey Maguire reprises his role as Peter Parker, aka Spider-man in this terrific Marvel Comics adventure.

In this second installment, Peter has more problems than the average Super-hero is expected to deal with. He’s human after all and is so exhausted after fighting crime day and night, he’s late for work at his pizza delivery job and falling behind at his physics classes at Columbia.

Things go from bad to worse after he’s fired from his job and the few bucks he makes taking photos of Spider-Man for The Daily Bugle barely give him laundromat money, let alone enough to pay for his dilapidated apartment.

Perhaps it's that Peter is so much like everyone of us, that makes him so appealing. Sure, he’s cool as can be when flying through the air attached by webs to passing skyscrapers, or stopping bad guys in their tracks. But, the idea that an ordinary looking guy with glasses, who drives a beat-up scooter, can be transformed into a hero to be proud of, are the things that comic book dreams are made of.

Mary Jane Watson (Kristen Dunst) returns also as Peter’s true love. She’s engaged, however to the son of the Editor of the Bugle; she’s tired of waiting for Peter to commit.

One of the great things about the film is the dialogue. The moments between two characters just quietly talking are so real, we almost feel like intruders on private conversations. That is unusual in an action film and very welcome. The scene where Mary Jane tells Peter she won’t wait any longer for him, and two scenes between Peter and Aunt Mary (Rosemary Harris) are effective and moving.

Alfred Molina as Dr. Otto Octavius, is this year’s villain. He’s developed a machine that he hopes will create cheap and plentiful energy through fusion. The experiment melds huge mechanical tentacles onto his back which make him look like a giant octopus. Unfortunately, the experiment goes terribly wrong, and the once mild-mannered Otto is turned into a crazed, wall-climbing killer, that the newspaper dubs “Dock Ock.”

The story goes a different route by introducing us to Otto before he turns evil. It gives us a chance to care about him as a teacher and husband and not just an evil creature.

Director Sam Raimi has seamlessly incorporated the special effects into each action sequence. When Spidey flies he’s much more realistic in this sequel, his back is arched and his legs swing up with the greatest of ease. The best effect has Doc Ock and Spider-man fighting on a runaway train filled with commuters.

The chemistry between Dunst and Maguire is great. They have a very sweet and believable relationship and we really want them to get together.

Raimi made it very clear that there will be another Spider-man in the future, I can hardly wait!