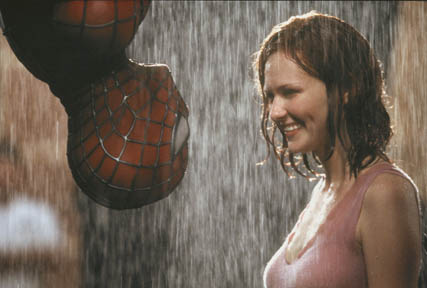 Entering the theater on opening night, you had the feel of something special and magical about to happen.  The house lights dim and the previews start, a hush starts to fall on this filled to the max auditorium, that is until applause and cheers break out when Spider-Man actually begins.

The audience is a mix of parents with their children, young couples, teens and even folks past the 50 year mark.  This is the draw of Spider-Man.  If you read the comics or simply were there due to the advertising hype you were not to be disappointed.

The film opens with a voice over from he whom you will find out to be Spider-Man (Tobey Maguire) that this is a movie about a girl - that is only part of the story.

True to comics past, our hero is Peter Parker but in a new millennium twist, he gains his arachnid powers after being bitten by a genetically engineered spider.  This shy and super smart high school senior becomes Spider-Man.  Unaware of all of the changes to his body, Peter moves on through school all the while wishing for the nerve to just talk to his next door neighbor Mary Jane Watson (Kirsten Dunst) who he has admired from afar since she moved in ten years earlier.  Antagonized by the "elite" jocks that all schools have, Peter eventually makes a stand using his new found strength only to be called freak yet again.  His only friend is the spoiled rich kid Harry Osborn (James Franco) who tries to get Peter to come out of his shell.

Peter is cared for by his aunt and uncle as his parents died earlier and the relationship is one of caring and love.  This relationship feels right in the film, especially when Peter begins his transformation into Spider-Man.  Like any teen, Peter is body conscious and a bit scared of the world, but Peter soon learns of his new powers.

Moving away after graduation, Peter rooms with his rich friend and decides to become a photographer, only to find out that his Spider-Man alter ego is all he can sell pictures of.  Soon Peter is placed in a position of saving the love of his life, Mary Jane, and we are introduced to the villain of this story, the Green Goblin, as the newspapers are calling him.

Ultimately, Peter finds his friend dating Mary Jane behind his back and learns that with his new found power, comes great responsibilities.  This becomes his motto.

As expected good wins over evil, but here the heart must take a back seat, for acknowledging his love for Mary Jane would only make her a target for further potential dangers.

Expect great special effects and know that director Sam Raimi (Darkman and Evil Dead) has stayed true to the comic while providing believable script and actors.  One can only expect a sequel and hope it is as good as the original.