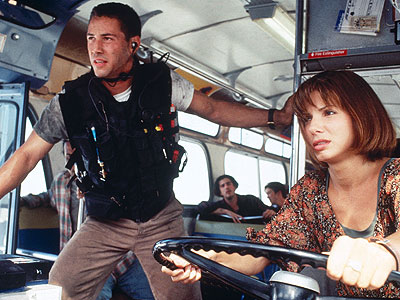 
From frame one Director Jan DeBont moves his hero Jack Traven (Keanu Reeves) through a series of dangers created by villain, Howard Payne (Dennis Hopper). The first challenge comes in a multiple elevator shaft and the last ends in a subway car on its side in front of the Chinese Theater on Hollywood Boulevard. DeBont, who was the director of photography in Die Hard, remembers all the good stuff that keeps an audience on the edge of their seats but allow laughs created by the characters.

The plot, based on a runaway bus that cannot move slower than 50 miles per hour or blow up, appears on the surface as thin, to say the least. In the hands of Screenwriter Graham Yost it moves from one crisis to another in believable but exaggerated circumstances. Payne wants $3 million and he uses the bus situation to make his demands. Earlier on he escapes from Traven and his partner, Harry Temple (Jeff Daniels) after blowing up the control cables on a high rise elevator. The bus, to keep its speed, must jump a 50 foot break in the freeway and plow through lines of cars while the characters switch drivers and deal with passengers who initially don't know what is happening.

To help Traven, Annie (Sandra Bullock of Demolition Man) is forced to take over the driving even though her license has been revoked. She takes the bus through all the barriers and dangers caused by Payne and she does it while wise cracking with Traven.

An obvious copy of Die Hard, it is filled with twists, turns, dangers, action and comedic remarks from the character. All this together makes for an evening of abundant action and fun. If other copies are as good as this one, I'll be in line on opening night.