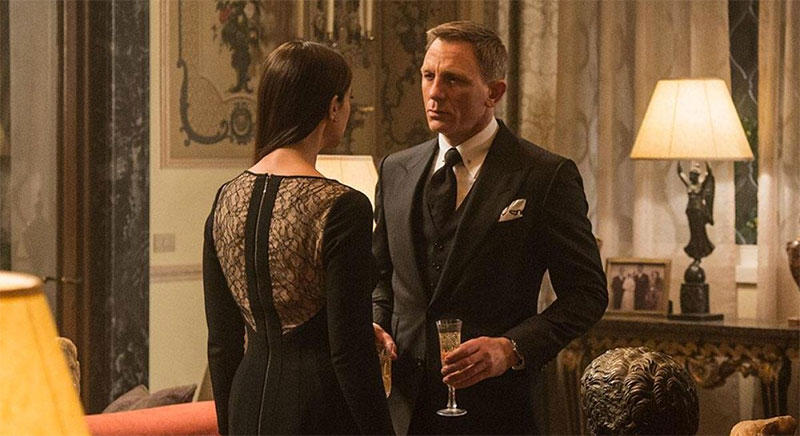 
The 24th film in a series based on Ian Fleming's novels could be Daniel Craig's last go-round as the most famous of all British Secret Service Agents - 007, Bond, James Bond. His fourth outing (second under helmer Sam Mendes) doesn't have the emotional impact of his last Skyfall (which co-starred Judi Dench and Javier Bardem as the strangely dastardly Silva) or the first Casino Royale even if it often revs with dynamism before too ambitiously reveling in the spectacle and glory of the battered, gritty charisma of the recent entries which have bolstered or let down its sinewy bulldog personality of a star. Does character development, conversation or story really matter here?

Spectre moves around from Mexico City (an incendiary opening tracking shot) to Rome, Austria, and North Africa with many exhilarating action sequences in a "Best Of" montage (as former foes are name-checked) which may be a tad protracted for casual fans of the longest-running cinematic series. Following special recorded posthumous instructions from the beloved "Mum", the 'Day of the Dead' is more than a celebration in the hands of Mendes with luxuriant visuals from cinematographer Hoyte van Hoytema throughout. It offers a bustling camouflage and a swooping turbo helicopter interlude that is very edge-of-your seat.

Shifting to a downer back in London (and a tattered MI6) is the fact that sinisterly reform-minded agent C (Andrew Scott) has a directive on a global surveillance program to replace the 00 unit leaving Bond, Gareth Mallory (the new M, a peevish Ralph Fiennes), and a more in the perilous field Q (a fine, funny Ben Whishaw) in the dump. But, it's Bond off to trace down the literally in the shadows presumed dead umber-villain Franz Oberhauser (a more restrained Christoph Waltz, not as rivetingly malevolent here say as in Inglourious Basterds after confronting Mr. White (remembered from Quantum of Solace). He's part of the eponymous clandestine group of agitating terrorists and executioners. But, what unfolds in the latter sections isn't really noticeable character-driven drama of an arduous search or tautly disquieting enough to truly make good on the memorable ways the series has excelled since Craig took on the role of a hauntingly, thrilling and sexy reboot.

The petulant Madeline Swann as the daughter of Jesper Christensen's Mr. White is hardly a fully drawn companion part for the striking Lea Seydoux (Blue is the Warmest Color, Midnight In Paris) is in 007's plans in a climactic run that recall the less efficient, more derivative Quantum. In connecting the earlier installments where the alluring, unctuous Vesper Lynd was mentioned more often, Spectre doesn't quite have the cool focus than hopscotching where references to earlier 007 pictures is easy to pick up on (from Dr. No to Thunderball to The Spy Who Loved Me to name three). Like Dave Bautista's thuggish, pursuing Minx to a Saharan lair as Waltz's Franz proves less than frightening even sans the silly one-liners during some pointed conversation. Adding a little flavor and distaff charm to the mix is Naomie Harris's Eve Moneypenny and (even in an oddly briefer case) Monica Bellucci's other Bond girl Lucia Sciarra.

So, if a cyber-technology savvy Spectre is more unconvincing (especially when considering the first hour to the final one) than intended Craig still manages to cycle in the best of a Bond that may be his swan-song with a relaxed, deeply personal, reliably watchable portrait (connecting his orphan past with what lies ahead). With the filmmakers, scenarists (led by John Logan and Neal Purvis) and longtime producers Michael G. Wilson and Barbara Broccoli delivering a sweeping adventure adhering to vintage form while letting their iconic protagonist be shaken and stirred, not the kind of martini he would normally order.