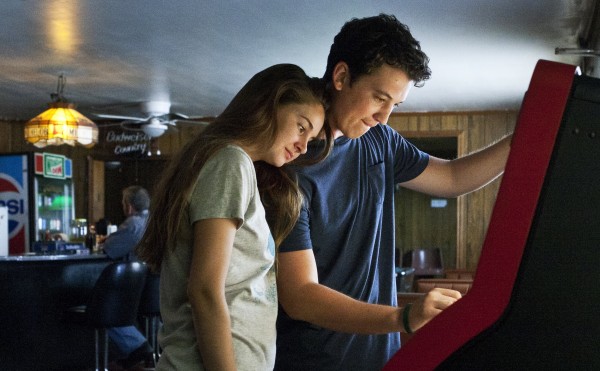 
A thoughtful New Age high-school picture nearly reaches its titular description after nimbly traipsing genre conventions capturing the ups-and-downs in a way that some (older) viewers might reminisce with a certain amount of fondness. Perhaps from a connection to knowing or being "the life of the party."

The Spectacular Now is a film that will appeal to fans of modestly budgeted Ruby Sparks and The Perks of Being A Wallflower and comes by way of Columbia and Yale graduate James Ponsoldt who knows the prominence of alcohol to his latest endeavor adapted from Tim Tharp's novel by the writers of 500 Days of Summer like his often sobering, striking Smashed.

Sutter Keely is an alcoholic high-school upper classman who enjoys mixing his whiskey with 7Up and will turn cosmopolitan girlfriend Cassidy (Brie Larson) against him after she's adopted his compulsive nature. A greater amount of a quite manageable run-time includes Sutter's effect on virginal, freckle-faced newspaper-delivering Aimee Finicky (Shailene Woodley, different from her effective turn in The Descendants) upon coming to on her lawn. An avid science-fiction reader has more on her mind about the value of a good college education than her below average (student-wise) male counterpart who climbs up a tree onto a roof and cruises around overnight after plunging into a pool fully clothed.

You see how Sutter (well played by Miles Teller of Rabbit Hole) has become a lush from his deadbeat philanderer of a dad (Kyle Chandler) who now lives nearly 200 miles away enjoying carousing with his chums. His mom (Jennifer Jason Leigh of Greenberg and daughter of Vic Morrow) is reticent to give the whereabouts of a man who gave up on a family whose son will seek out at least to get to know him a little bit and maybe get some advice in the process.

An opportunity once foreign to Aimee becomes liberating and finally enlightening offers an intimacy with a young man who lives in the present and doesn't realize the corrupting qualities he possesses. The secret to the success of The Spectacular Now is the strong rapport that is honed between Teller and Woodley as Ponsoldt knows how to coax an honest, viable portrait from nearly every actor who makes the most of their screen time. As in recent films like The Way, Way Back or The Kings of Summer the adults, particularly Chandler, are able to make a positive impression without relegated to stereotype and to the background.

If more often than not the plot points and set pieces are typical for what adds up to more than romance enveloping family drama the filmmaking making solid use of Georgia locations has much of the realistic aplomb of the aforementioned Joseph Gordon-Levitt/Zooey Deschanel chronologically zigzagging film. It provides a bracing reality that is more identifiable and moving than expected especially in the end when a campus reunion takes place