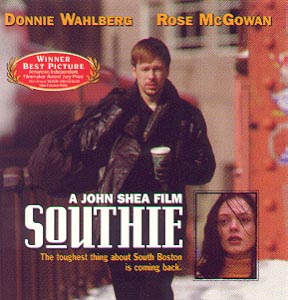 So called independent films come from the heart, head and gut, not the glitz. Southie, a Best Picture winner at the Seattle International Film Festival, follows that formula as it explores families and the underworld in South Boston.

Director John Shea has assembled a unique, interesting cast that carries the emotions and passions of a struggling Irish family in the bedrock of Irish-American communities - South Boston, Massachusetts.  From the lead by new comer Donnie Wahlberg to the Irish Don played by legendary Hollywood tough guy Lawrence Tierney, each character rings true.  Shea, along with directing Southie, plays Wahlberg's cop cousin; Rose McGowan and Jimmy Cummings also star along with numerous extras who volunteered to be in the film.

Wahlberg's Danny returns to Southie from New York in time to attend a typical Irish wedding with celebrating, drinking and arguments that turn into fights.  His romance is in trouble, his mom has a heart condition and fighting with the wrong people has placed him on the no work list from the Teamsters.  His brothers, sister and mom are part of the loyal but not well educated community.  Even the Cuban Americans in Miami are not as tight as the Irish in South Boston.  That tenacity has brought rewards and, at times, great disappointment when met with strong outside power.

Danny's conflicts are not a large as state or national issues, they revolve around the streets, bars and funeral parlors in the neighborhood.  There is no place that is safer and none so dangerous for Danny and his parents when they appear to betray one faction of the underworld.  How the turmoil is played out, who loses out and who survives is only resolved at the conclusion.

The Godfather, which must be regarded as the master work for underworld films is somewhat paralleled in Southie.  The names and ethnic background are different (Shea himself grew up in an Irish community in Springfield, Massachusetts) but early on we find ourselves watching a wedding scene as in The Godfather.  Not one filled with stars and a society band but the kind of wedding most ethnic Americans attend at a local hall, with a local band and all the family present.  The Southie wedding appears more real, true and actual than the beautiful spectacular scene in The Godfather.

The hits, the willingness to be insulted at the drop of a word, the tension between the two factions play so real, we find ourselves not looking in but feeling a part of the tension and pain of the characters.

Lawrence Tierney who has appeared in fifty two films mostly as the bad guy, fits perfectly as the old underworld leader who is under attack by the new faction.  He brings greetings to the new bride and groom in the wedding scene and knows just how to counsel Danny at a critical funeral.  His wisdom of age and the community respect he commands reflects his underworld power and his commitment to the South Boston community.

Locked in by limited education and loyalty to their community they are susceptible to the disease of the mob's way of life, they are also a part of a vast loving proud community that won't quit.  On St. Patrick's Day the parade and the Senator's breakfast manifest that pride, as it does at the end of Southie.

Director Shea has taken material that has been spread in vast quantities across the screen in romantic fashion and placed it in a film that moves on the streets.  This is not a work that leaves us admiring the girls, cars, power and money of the underworld, rather it shows us the grit, pain and reality of this life on the edge.  It also allows us to watch the peace and freedom that comes when the conflict is resolved.