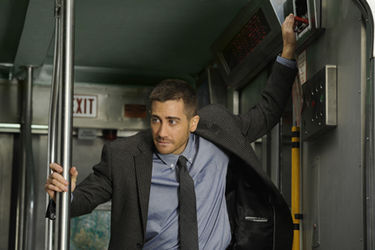 The new sci-fi action thriller from Duncan Jones (after his introspective, stripped-down Moon) manifests the ability to use more production values to immerse one in its timely reality, with a little stream-of-consciousness blended in.

Gyllenhaal, who was also appealing in Love And Other Drugs opposite Oscar co-host Anne Hathaway, is weighed down by the physical and dramatic implications of a setting and narrative from Ben Ripley. The actor responds with a compassionate, cogent portrait from what is pretty high-minded like The Adjustment Bureau and the more involving"Inception.

His helicopter pilot is part of an eponymous government experiment enabling him to cross over into another man's identity (a schoolteacher) for the final 8 minutes of his life. Colter learns that he's part of a dangerous mission (he's relayed little details about it) to locate the bomber of a Chicago commuter train. In Ripley's repetitively structured storyline (reminiscent of the fine fable that was Groundhog Day), Colter must relive a bombing incident repeatedly, picking up clues each time.

When Colter is first on the train, he is called Sean Fentress by an attractive woman introducing herself as Christina (Michelle Monaghan of Due Date). He's never seen her before, so how does she know him? This intriguing unbounded deconstruction of film genres with designs on characters and ideas relays much imagery. Especially after the train goes up in flames with Christina and Colter (maybe Sean?) among its victims. Like the recent Buried with Ryan Reynolds, a closed-knit feeling comes when a woken Colter appears inside a tight metallic chamber.

Important subordinate characters in Colter's orbit are Capt. Colleen Goodwin (Vera Farmiga of Up In The Air) and the head of the program Dr. Rutledge (Jeffrey Wright of W).  Colleen provides the key communication with Colter throughout the various interactions and series of attacks with the smooth blue-eyed Farmiga exuding palatable chemistry with the leading man with gradually extended conversations.

Jones does well to build much apprehension (especially from his designer and lenser) for all the logistics befallen on Colter to accomplish such a risky task, especially with a more sizable target in a more congested area of the Windy City. While not as negatively mystifying as Unknown or tautly thrilling like Unstoppable, Source Code consistently iteratively surges through uncertainty and confusion with a capable Gyllenhaal doing the heavy lifting against mass devastation as well as incoherence.