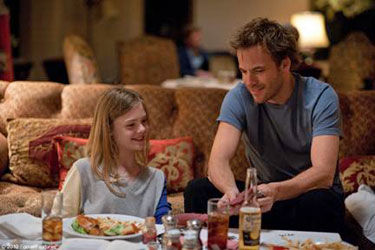 
Sofia Coppola's latest cinematic venture may not be what most of her supporters expect of her, but a banal narcissism can be illuminating or ruminated to some interesting, if suspect satirical effect.

A moody, beautifully shot Somewhere features B-movie star Stephen Dorff and Elle Fanning, as many art-house patrons will immediately identify its premise with the filmmaker's more resonant Lost In Translation.

Dorff's hedonistic, inarticulate Johnny Marco isn't the fading star that had the Bill Murray character in Tokyo to shoot a Suntori whiskey ad (for $2 million) and ponder his own existence and ultimately bond with Scarlett Johansson's recent Yale philosophy grad.

From how he's perceived by press and others, Johnny resembles a Sean Penn of around the time he was married to Madonna. So, the problem many may have with a film where little action (or anything of significance) occurs is with the ennui of such a handsome, bratty lothario.

The spoiled movie star is in cruise-control (like his initially circling really cool black Ferrari coupe) promoting an action film with co-star (Michelle Monaghan) while getting ready for a new project. He's got the addled life (his American Dream) from Hollywood's remote, swank Chateau Marmont where he can't stay awake when pole-dancing twins humorously perform for him.

Here Johansson's Charlotte comes in the form of Fanning's sweet preteen Cleo, a curious ice-skater who suddenly is dropped in the arms of Johnny (her dad) by his busy ex-wife. It's a chance for some needed father-daughter time. They'll lounge around, head to Milan, Italy for one of Johnny's junkets, and then to Las Vegas for her summer camp.

If Dorff (usually known for his menacing turns as an actor) is unable to make Johnny personable enough or charismatic enough to appear in nearly every frame. Coppola's careful attention to the humdrum nature of celebrity over subtext or a scent of plot complexity seems to hamper the opportunity for a richer lead . This allows for some amusing one-scene moments with the likes of Benicio Del Toro (The Wolfman), the most recognizable, to pop up amidst a jet-set existence. Maybe the filmmaking is just intent on artistically immersing one into Johnny's dilemma.