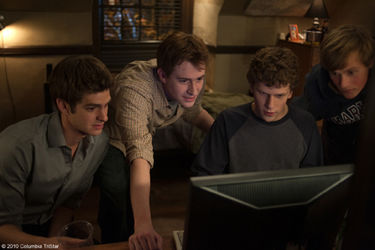 
The portrayal of truth and objectivity in this new flash-backing and flash-forwarding drama by David Fincher is rather elusive while disseminating and empowered by something quite relevant and ingenious.

The chronicling of Facebook's creation and ascendence revolutionized communication catches a zeitgeist where ambition is spurred by loneliness and alienation. It's hero or anti-hero almost seems like a New Age Howard Hawks character - a frustrated 26-year-old Mark Zuckerberg who became cofounder and CEO of Facebook.

Jesse Eisenberg (Adventureland, Zombieland) really shades Zuckerberg so well that works off a nerdy persona. The neurotic, bold Harvard undergrad drunkenly shakes things up on campus one night after being dumped by girlfriend Erica Albright (a resilient Rooney Mara of The Nightmare on Elm Street).

His misogynistic, viral FashMash causes the university system to crash and as the socially inept genius thinks way beyond the Harvard dating scene when it comes to a genuine on-line experience his personal and legal troubles catch up with his amazing success from the desire of acceptance.

The Social Network unfolds in an icy, wistful and often searingly witty way thanks to the solid, intelligent collaboration of Fincher and Sorkin as its hard to believe a script with so much dialogue comes in with this kind of runtime. The snap from the lines especially at the outset, and throughout, especially from Eisenberg shows that something provocative from all the contentiousness doesn't need all that much visual italics.

The gifted young cast besides an attractive unyielding Mara (she'll be featured in Fincher's next high-profile project) includes Armie Hammer with some tweaking as the rowing entitled upperclass Winklevoss twins. Andrew Garfield excels as the film's emotional center through Mark's Brazilian native roommate and close friend Eduardo Saverin who bankrolls the growing operation. Justin Timberlake is definitely a scene-stealer as hustling Napster creator Sean Parker who gets Mark on the fast track with investors.

Fincher, who brought a sweeping cool sheen to The Curious Case of Benjamin Button, works his magic with a dynamic Sorkin through at least a couple of the seven deadly sins to make so many scenes (at a Regatta, with the Harvard president, hearing Bill Gates or at a Caribbean-themed party) resonate within all the legal conflict. The expert, if brisk detailing of a collection of smart, but flawed young adults seemingly exist in a world all their own amidst depositions and lawsuits. In a strong stamp on a generation, it locates a timeless humanity via the connection to demographics and corporate structures from the rapid rise of modern computer technology.