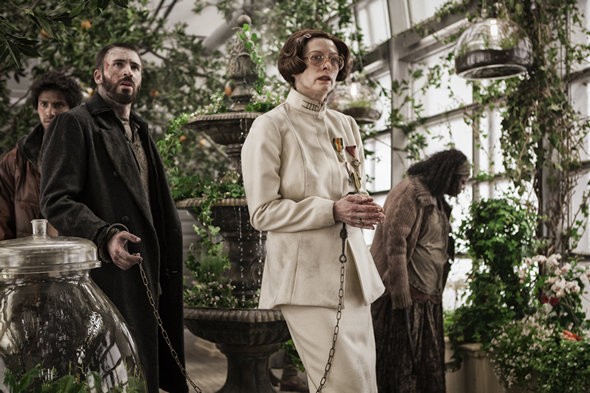 
This post-apocalyptic sci-fi mystery is Bong Joon-ho's first English-language feature and succeeds in allegorical fashion somewhere between Elysium and District 9. The co-scenarist works often in proficient strokes off of a French graphic novel 'Le Transperceneige' in "Snowpiercer" where a second Ice Age has left remaining humans away from the gelid orb inside an immense train which help execute a presumably absurd set-up with a certain surreal extremity that may work for many discerning patrons, up to a point.

It's still good to see Chris Evans outside of his Avengers, Captain America shield in the rear of the churning choo-choo as revolutionary proletariat Curtis Everett. Edgar (Jamie Bell of the "AMC" series Turn) is his Tonto and they are determined to get up to the front of the carriages where firearms are wielded by vicious guards.

Through the constraints provided by Joon-ho, the result alternates between the lurid and the striking interiors (like a nightclub and aquarium) to wonderfully realized exteriors where much speed is attained through most icily landscapes. Moving forward pits more tension for Curtis (a gritty turn for Evans) and Korean star Song Kang-ho (as a high-ranking security person). Go Ah-sung is Yona the curious daughter of the Song character and hard-boiled adversaries include those played effectively in varying amounts by Vlad Ivanov and Tilda Swinton (Grand Budapest Hotel) who channels some of the Margaret Thatcher toughness. The wide-ranging cast also includes Ed Harris, Octavia Spencer (The Help) and the venerable John Hurt  (Love and Death in Long Island).

Snowpiercer turns out to be hardly contrived but not for the faint of heart and is oddly affected in an unsubtle manner that goes to show that the practitioner of smartly realized cinema like Mother and the phantasmagorical The Host can proceed deftly and grotesquely effectively from something daft.