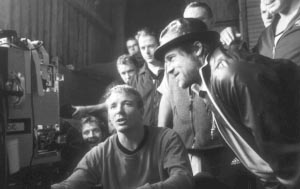 American audiences will probably want to fancy Snatch for its casting of Brad Pitt and knowing who director Guy Ritchie is: the British hubby of Madonna and father of her second child.  They will quickly realize that the film maker is bold and frenetic and quite adept at finding humor in very grim situations, even having a couple of the bad folks remarking how much they like listening to the Material Girl's Lucky Star.

Ritchie probably just wants to take you for a fun ride, his latest romp has toppled the box-office charts at home and he feels at home with post-modern noir laced with dark comedy.  Able to work a big cast into danger through spiraling plots that intersect, not so much inverted from Quentin Tarantino's Pulp Fiction he works chaotic hi-jinks from a large stolen diamond the size of an infant's fist.

The primary characters may be tough to keep track of, even after Ritchie uses sharp visuals with their names in big letters.  Yet the deft, angular narrative snowballs and the oddball, shady characters know what and how it is to be conveyed.  From Antwerp to London to New York the story moves,  zooming within scenes to weave a complex but appealing tale that is much like Ritchie's Lock, Stock, and Two Smoking Barrels, but more seedy, temperamental, with more thoughtful dialogue.

Though Lock, Stock wasn't that visible in the States, it still attracted Pitt who plays an unintelligible Irish boxer of a gypsy clan that lives in trailers and he has a lighting-fast right cross that doesn't bode well for taking a fall.

This swiftly edited, gritty, roller coaster gangster comedy has ace thief Frankie Four Fingers (Benicio Del Toro) swiping the diamond at the outset for the New York jewish jewel honcho Cousin Avi (Dennis Farina) who hates England but ends up going there when the gem is snatched from the vulnerable Frankie after he attends a fixed boxing match rigged by the endurable Russian crime boss Boris The Blade (Rade Sherbedgia).

Turkish (Jason Stratham), the narrator of Snatch and an unlicenced boxing promoter has to get Pitt's Mickey, who wants a caravan for "me ma" to go down in the fourth round or else the nefarious businessman in Brick Top (Alan Ford) will feed him to the pigs.

Ritchie knows that most won't be able to keep up with this "move-it-quick" tale, but like his "Jewish" jeweler in Doug The Head (Mike Reid), we know what's important.  Adroitly gelled with a nice ironic twist involving Pitt who's in a surreal, visceral bare-knuckled fight and a patch-eyed dog who squeaks with the mayhem in a flashy, escapist, but convincing way.