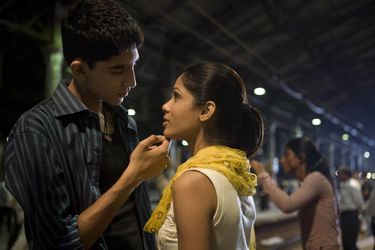 
Danny Boyle brings a surge of visual energy with raw, colorfully gritty qualities and insight into the cultural divide in the stirringly crowd-pleasing Slumdog Millionaire.

Boyle and his writer Simon Beaufoy create something special and unsentimental through the success of Jamal (Dev Patel) on India's version of "Who Wants To Be A Millionaire".

Jamal is nabbed by a dogged detective (Irrfan Khan) and given a good goingover to see if he knew the answers in advance. Jamal, now 18, comes from the low-caste area of Mumbai, so how could he be so good on the show, on his way to what isn't far from the equivalent of half a million dollars.

As the interrogation proceeds through the gameshow stuff, it's about Jamal's life experiences as an orphan, first played by Tanay Chheda, with brother Salim (Azharuddin Ismail) in a slum.

Then their tenuous adventures are recounted with their "third musketeer" Latika (first played by Rubina Ali, then Freida Pinto). After Latika disappears during an escape, Jamal continues to look for her as Boyle has great continuity in the nine actors who play the three during childhood, as teens, and young adults. All create distinctive, vivid personalities in sensitively shading their characters, even as Salim goes on a more perilous road.

Patel is the engrossing fulcrum of this wonderfully wrought tale with instances of violence which Boyle wisely doesn't dwell upon. The feeling of an unsettling urban underworld bearing down on Jamal is overwhelming, yet in his presence there is a yearning for humanity. And, Boyle presents his frenetic existence in witty, edgy sequences, whether in a dumpyard, the bustling slums, in the city, or on the railway.

Slumdog Millionaire resonates throughout with the crackling conflict inherent in the socio-economic struggles of Jamal, Salim, and Latika. The propulsion of their adventures connected to Jamal's national climb strikingly calls to mind Dickens and Boyle's own feverish Trainspotting. The filmmakers and Beaufoy finally intersect it all in the last reel in nerveracking, taut fashion in ways that doesn't trivialize the plight of those in society worth less than dogs.