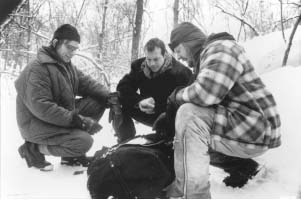 A Simple Plan presents a real dilemma.  Three men, Hank Mitchell (Bill Paxton), his older brother Jacob (Billy Bob Thornton) and Jacob's buddy Lou (Brent Briscoe) discover the snow covered wreck of a small plane, which holds a dead pilot and a duffel bag containing over four million dollars in cash.  In retrospect it's not worth the money, but what an opportunity.  The pilot is dead, the money is obviously not legal, who will ever know if they take it.

The three men take the money and enter a deadly game of theft, greed and murder.  Hank's wife, Sarah (Bridget Fonda), believes the cash should be turned in; until she sees the stacks of money on her table.  She suggests bringing back some of the money to keep the theft a secret.  While attempting to return to the site of the crash, Jacob overreacts to the untimely appearance of a neighbor and the deadly spiral begins.

Based on the novel by Scott B. Smith, Director, Sam Raimi molds the characters on a background of snow and darkness in a midwestern small town in January adding to the atmosphere of the out of control spiral they enter when they open a Pandora's box filled with money.

One of the best films of the year filled with powerful performances, particularly by Billy Bob Thornton, it brings enormous tension to the characters. This is one film watched sitting on the edge of your seat attempting to yell out, "stop, end this; it's not worth the consequences" but the characters have already sealed their fate; there is no turning back.