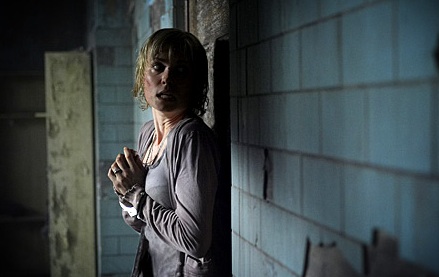 Starring Radha Mitchell (Melinda and Melinda, Pitch Black) and Sean Bean (Flight Plan), the most redeeming qualities for those not into its video game feverish source material have to do the the meticulous attention to art direction to provide as much atmosphere as possible.

From the outset it's clear that one is going to have to swallow plenty of logic as Mitchell's mom Rose has to save sleepwalking adoptive daughter Sharon in a very vertiginous sequence. The plush residence of Rose and husband Chris (Bean) happens to be in the woods adjacent to a cliff overlooking a waterfall.

Since Sharon speaks the words "Silent Hill", Rose is convinced that she has to go to a place in West Virginia not indicated on any maps with some details on-line to its mysterious origins of a horrible mining fire some 30 years ago. Chris can't reason to her about having their daughter get psychiatric or medical attention and will cut her credit line.

She'll take Sharon, a game Jodelle Ferland, driving through a metal fence after being suspected somewhat unstable by a leather-clad cop Cybil (Laurie Holden). Once reaching this destination an "accident" will end up separating mother and daughter for most of the rest of the film.

So, the video game antecedent starts to take hold as the look of a ghost-town puts the strong-willed Rose in a pursuit, more far-fetched, but not so unlike predicaments in The Forgotten or Flight Plan.

Rose finds herself in dark buildings in a strange coal-mining village where it snows ash, while the lighting can exhibit sharp transitions from darkness to intense sunlight. Of course, there are nasty creatures she'll encounter, not just monstrous ones, but the kind that are zaftig, undead nurses in tight dress.

Cybil and Chris will work to track down this attractive blond woman in different ways as the increasing convoluted screenplay by Roger Avary, director of The Rules of Attraction, forges impassionately into territory staged and told with more coherence in The Omen and The Crucible.

Not that gamers won't be into the fiery last act of Silent Hill with plenty of Grand Guignol imagery after Rose has to contend with the likes of the fanatical Cristabella, archly rendered by Alice Krige. The filmmaking has a hyper-stylized look with changing stocks and cutting to present the fiendish horrors surrounding Rose and her daughter with a doppelganger in the form of Alessa. Deborah Kara Unger is hardly recognizable in longer tresses as a maternal wraith-like figure. Someone else looks like their head came out of a fireplace.

The director here is Christopher Gans (Brotherhood of the Wolf) who seems to indulge too much in the production rather than his earlier, more involving, yet protracted exercise. Silent Hill has a lot to explain to try and overcome its inexplicable nature, most notably knowing little about young Sharon's disturbed personality. But, in this kind of movie, the arcane flashbacks just add up to more misshapen mishmish elevated to CGI excess highlighted by snaky barbed wiring and flaying skin. In the end, the experience should be more surreal and chilling, but really is more wearying than a second-rate episode of "The Twilight Zone."