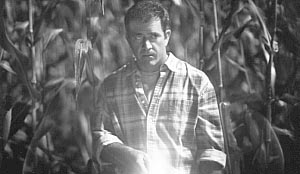 While watching the ads and trailers for this film you are almost lead to believe this to be a sci-fi adventure and that could not be further from the truth.  This fact will lead to Signs being avoided by so many people who would actually enjoy it.

The true facts of the film are based on love, loss, resentment and faith.

The story revolves around Father Graham Hess who lost his wife to a freak accident.  It is this event that is Hess test of faith and ultimately his loss of the same.  While caring for his two children at his farm, Graham discovers his fields have crop circles appearing in them.  Dismissing them as a prank, Graham and his younger brother Merrill, a former minor league baseball star, do their best to get back to a normal life.

Suddenly this prank of crop circles turns into a world wide event and soon alien spaceships arrive on the scene.  Here again we see faith tested.  Are these visitors friend or foe; a sign there is no God; a sign of great things to come?

Throughout the film we see Graham responding to the accident which claimed his wife as a man of the cloth, never expecting to watch his wife die.  These flashbacks show the torment Graham feels and the depths to which his very soul has paid the price of his faith and now the loss of it.

The only thing holding this man together is his family, his son Morgan and daughter Bo.  Combine this with the undying respect and love of his brother and one can not help weep openly at times as this film unfolds.

Without giving away the film, know that the aliens are not friends and not all is as it would appear.  Director M. Knight Shyamalan guides us through yet another intricate dance of story upon story, clue upon clue and deception and danger at every turn.  You will cringe at times, cry at others but you will always be on the edge of your seat.

Starring Mel Gibson as Father Hess, Joaquin as Merrill and the remarkable Rory Culkin and Abigain Breslin as his children this film might very well leave you if not questioning your faith, searching for new meaning in your life.

Make sure your popcorn is hot and your soda cold - you will not want to miss a minute of this one - and look for me in the back row as I will see this one again.