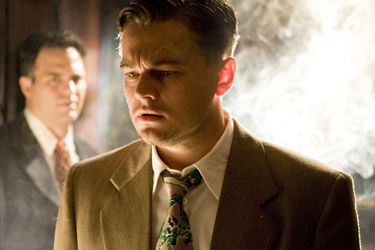 
In Martin Scorsese's ambitious, pushed-back Shutter Island, two duly-appointed U.S. marshalls investigate the disappearance of a "patient" from a hospital for the criminally insane in 1954. Here's an ostentatious, nightmarish picture felt during the onslaught of paranoia during the Red Scare and McCarthyism.

In his first feature since The Departed, Scorsese has his reliable muse in Leonardo DiCaprio back from that tough leading role as the shattered, unsettled green-ish Teddy Daniels first seen aboard a ferry dealing with some sea sickness heading to a locale surrounded by huge rocks.

In this uneasy, thick adaptation of a Dennis Lehane novel by Laeta Kalogridis with its flashbacks and mind-altering states, the titular island (a fictional one off of Boston harbor) leads to much trouble for Teddy and his partner Chuck Aule, a solidly bewildered Mark Ruffalo. There's some deception from the chief administrator of the island's Ashecliffe hospital (filmed primarily at an abandoned state facility), as a hurricane is brewing, as well as an inmate riot which leaves them in a very precarious, perilous state.

Such a desolate, austere place is where Scorsese and DiCaprio drives the claustrophobic, psychological conflict through a paranormal mystery which runs like a rollercoaster - more taut and tense in the first and last acts while waning a bit in its middle portions.

Teddy has his own issues to deal with; the clandestine, yet cunning marshall has seen and done much to remember when it comes to Nazis and concentration camps. It's a part arguably more complex than his edgy, earnest Howard Hughes in The Aviator, one of the more entertaining in the Scorsese canon.

From its disturbing mood and deluge of imagery, Shutter Island isn't much unlike Scorsese's remake of Cape Fear with one of his favorites, Robert DeNiro, in the famous Robert Mitchum role. Here's a case of constantly discerning a reality check for those sharply dressed in beige and brown suits. The filmmakers have a canny ability to shake things up from things like fears, memories, and riddle as a sense of trust and protection seems headed for a downfall.

Inside the rugged cliffs and the electrified outskirts of the island are those like the vigilant Dr. John Cawley (Ben Kingsley) and ominous Dr. Jeremiah Naehring (Max von Sydow), the former representing the transition to new surgical innovations, and the latter a former Nazi involved with medical experiments perhaps unbeknownst to his establishment and the government. Jackie Earle Haley (Watchmen, Little Children) lends an eerie presence as an enigmatic, pained man George Noyce who has a connection to Teddy.

This lengthy, not quite riveting noir-like entertainment is benefitted most by DiCaprio's raw and sensitive portrait of someone close to a "bigger truth" while on the edge of his own sanity. There are also sizable contributions from Scorsese's crew, like editor Thelma Schoonmaker, designer Dante Ferretti, and especially the detailed lighting of lenser Robert Richardson in and around such a daunting place.

What is mostly strangely compelling with one big plot shift among other "twists" has three important female characters played by Michelle Williams, Emily Mortimer, and Patricia Clarkson, the latter in a dual role. They add to the apprehension and anxieties for Teddy while in an isolated asylum with the latter two "representing" the escaped, mad murderess, and the former Teddy's gold-locket wearing wife Dolores, accused of heinous crimes, having tragically died. Dolores comes into view in dream-like visions with sanguine touches in ghost or as herself. Out of the three it is Clarkson who rivals DiCaprio in upending expectations of a meller especially in a cave encounter with no-frills portentions which makes the psychological realism more flavorful.

Scorsese's latest dizzying, burdened stylistically elaborate experience may be a tad open-ended for most filmgoers' tastes, but it's like a drug for a paralyzed humanity with its discordant (check out the orchestral horns), disparate parts exposing some arresting images with dread provoking but shuttering a poignant payoff.