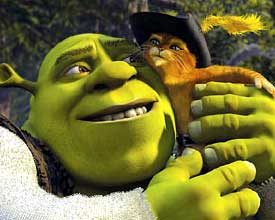 Shrek, that amazing green ogre has returned and this time he’s still in love. Shrek 2 is basically a love story between Shrek (Mike Myers using his lyrical Scottish lilt) and Fiona (Cameron Diaz) it’s sweet, lively and clever, but above all, it’s terrific fun.

The film opens with Prince Charming (Rupert Everett) rushing to the tower where Princess Fiona has been locked away. His kiss will turn her into a beautiful young woman, however, he’s too late. Shrek got there first and his kiss transformed her into a female ogre like him. They fall in love, marry and this adventure begins.

Fiona and Shrek are just settling down to wedded bliss when they’re summoned to the Kingdom of Far Far Away by her parents, King Harold (John Cleese) and Queen Lillian (Julie Andrews). Shrek resists going as he’s sure Fiona’s parents will be shocked because they’re both big green ogres, but the bride persuades him to make the far far away journey.

The talkative Donkey (Eddie Murphy) makes sure there are no dull moments on the long trip.

The couple finally arrives in what looks like an animated Hollywood-like city complete with chic boutiques lining the streets and even a huge “Far Far Away” sign on the top of a hill, like the real thing. Shrek’s worst expectations come true when the townspeople and Fiona’s parents get a good look at the couple, there’s an audible gasp from the crowd.

Queen Lillian tries to make the best of her daughter’s appearance and her choice of husband, but the King does his best to break them up. He has a big fight with Shrek over a lively feast with turkey legs pounded on the table for effect, and a roasted pig flying in the air in anger.

At the end, King Harold conspires with the diva-like Fairy Godmother (Jennifer Saunders) to pair Prince Charming with his daughter and get rid of his grotesque son-in-law. The fun really spikes when Puss ‘N Boots (Antonio Banderas) enters the fray. He’s preening and purring and hired as Shrek’s assassin, he truly dominates each scene he’s in.

There’s a slow start to the film, but once the couple get to the Kingdom, the action is non-stop. Whether it’s the Royal Ball with red carpet commentary by a Joan Rivers look-alike, the break-in of the Fairy Godmother’s potion factory, or the rescue of Shrek, Donkey and Puss ’N

Boots by Pinocchio, who uses his growing nose as a rope. The clever silliness is in constant high gear.

Andrew Adamson, Kelly Asbury and Conrad Vernon have created a terrific bit of fun. I thoroughly enjoyed every laugh-filled minute.