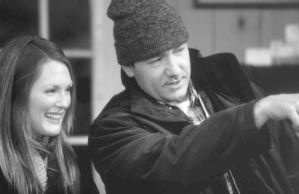 The Shipping News received some last minute changes prior to its limited Christmas release and a wider release in January 2002.  That may be damaging for the Oscar pretender from Lasse Hallstrom's new film.  But there's more to like than dislike as the director imparts a formidable visual sensibility in adapting E. Annie Proulx's acclaimed novel.

Hallstrom is rejoined by scenarist Robert Nelson Jacobs from Chocolat and the story makes fine use of the windy, rocky coastal fishing village in eastern Canada.  Here, the characterizations go deeper than Chocolat, but there's an emotional undertow that becomes more apparent than the influence of a mother and daughter in a quiet, late 50's French hamlet.

Spacey, who walked a fine line between a patient in a Manhattan psychiatric ward and an alien in K-Pax, is the meek Quoyle (pronounced as "coil") who drifts along as an ink setter for a newspaper in Poughkeepsie.  The parental and spouse abuse from the lively Petal, played flamboyantly by Blanchett, leads to a possible chance at redemption through a move from a decent, upstate abode.  The Shipping News changes abruptly in tone from personal tragedy with the appearance of Dench's Aunt Agnis Hamm as her feisty presence lures him to a dilapidated old family home on the outskirts of a Newfoundland shipping community.

Quoyle has a precocious daughter in Bunny, acted with little distinction by triplets Lauren, Kaitlyn and Alyssa Gainer.  He eventually gains employment because of the past work, not from his skills as a reporter with the local newspaper called "The Gammy Bird" with Glenn's Jack Buggit in charge.

Hallstrom lets the pace take hold as Quoyle reports on the shipping news and nearby car accidents; not really what the man looking for a fresh start had in mind.  A lady named Wavey Prowse, done by Moore, with subtly in her character's emotional past, is the single mother he becomes attracted to.

The Shipping News isn't enervated by the interactions of Spacey and Moore as individuals who share the similar troubles and are uncertain at first in reaching out because of how they have been loved in their lives.

It's hard not to admire how Hallstrom works with his cinematographer Oliver Stapleton and composer Christopher Young to let the viewer into vividly, rough existence felt by Quoyle.  An ominous percussion alternates with flavorful compositions as The Shipping News resolves to take an evocative plunge.  Yet, the emotions appear to be lost on the harsh seas as Hallstrom can't find the means to anchor an effective conclusion from a stark, isolated psychological condition.