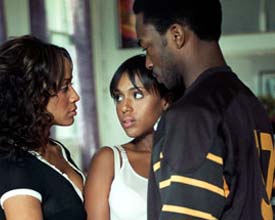 Even the usually sharp, incisive Spike Lee has his lapses, and they are in ful view with She Hate Me. His controversial, individualistic imprint is alive and well, but a solid cast is sabotaged by his overblown bamboozling of contemporary society, most notably when it concerns black culture.

Newcomer Anthony Mackie is cast as the leading role as Jack, very successful in a pharmaceutical firm (working on a new Aids vaccine). He decides to put a sting on the illicit activity of his boss (Woody Harrelson) and isn’t just terminated. The investigation leaves him without any assets. So, this tale with a pornographic streak to it, scripted by Lee and Michael Genet, has the desperate Jack, well acquitted by Mackie, inseminating his ex-fiancee (Kerry Washington), now a lesbian, and her girlfriend (Dania Ramirez). Nearly two score of women and thousands of greenbacks later, problems occur when he hooks up with his latest score (Monica Bellucci) who happens to be the daughter of a mafia head (John Turturro). He couldn’t pull out before sniffing federal agents find out who this big Viagra stud really is.

Lee is so concerned about covering so many issues from business finagling to civil rights, racism, and sexuality, She Hate Me becomes so absurdly overwhelming, just like Jack appears to outperform Wilt Chamberlain in his prime. The film is a chameleon of styles, whose number almost equal the short cut through characters in Love Actually. For a bit it’s a romancer, then a courtroom drama with feeling for “Mr Smith Goes To Washington.” But, it’s also a political satire that gets bogged down by organized crime and legal malfeasances. A Juggling act, indeed, which doesn’t gel as meaningfully as it is intended to be.

There is deft work again with his crew, from the nifty lensing of Matthew Libatique (Requiem For A Dream) to doleful jazz riffs from Terence Blanchard. This sprawling parable dutifully makes the case for moral bankruptcy often consumes those who seem to be out of its reach. A flashback of the Watergate breaking with Chiwetel Ejiofor (Dirty Pretty Things) as Frank Willis stands out more than the overloaded main story. And women, whether heterosexual or homosexual, will probably be turned off by the way She Hate Me finds pleasure in sex and romance. Lee displayed a provocative, moving momentum in his last film, 25 th Hour, but his ambitions belie what shouldn’t have been in this gratuitously mopey, albeit cleverly conceived and connected film.