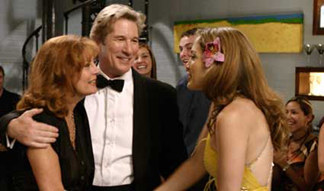 In 1948 a film called “A Date With Judy” Jane Powell and her side-kick Elizabeth Taylor are teens who suspect Powell’s father (Wallace Beery) is having an affair with Carmen Miranda who is teaching Beery the rumba as a wedding anniversary surprise for his family.

In Shall We Dance screen writer Audrey Wells (Director Under The Tuscan Sun) pens a classic romantic comedy staring Richard Gere and Susan Sarandon as his wife with Jennifer Lopez as the dance instructor. There is an initial flirtation on Gere’s part when he sees Lopez in a second floor dance studio window. Taking a chance he heads up the stairs pushed by Lisa Ann Walter a dance instructor who asks him to carry her costume. As the film continues she is the a constant source of comedy for everyone.

Stanley Toucci is a dancing fool with a long wig to hide his baldness after hours from his legal work. When he dances with Gere they bring the house down. Anita Gillette is wonderful as the dance hall owner who is just barely keeping the business going. Gere joins the Wednesday night ballroom dance class with two misfit hopefuls who provide more comic moments for the film.

In this film it’s the wife (Sarandon) who suspects her husband is having an affair, she hires a detective to tail him. Her suspicion is difficult to understand and Lopez appears awkward but everything else works flawlessly.

Shall We Dance balances on the strength of a long term marriage which could be threatened by Gere’s need to change or add something new to his life. But that easy route is avoided by screenwriter Wells who appears to understand that many marriages are anchored and that the flirtation in Gere’s mind doesn’t necessarily lead to infidelity. In fact it leads to greater romance.

But Shall We Dance is not a serious look at marriage, it’s a fun look as a series of interesting lovable characters whose relationships are summarized just before the ending credits. That final summary locks up the very satisfying flick.

With adequate dancing, except for the fast step by Gere, and even some clumsy directing the script by Audrey Wells works perfectly.

If you are asked, Shall We Dance, say YES.