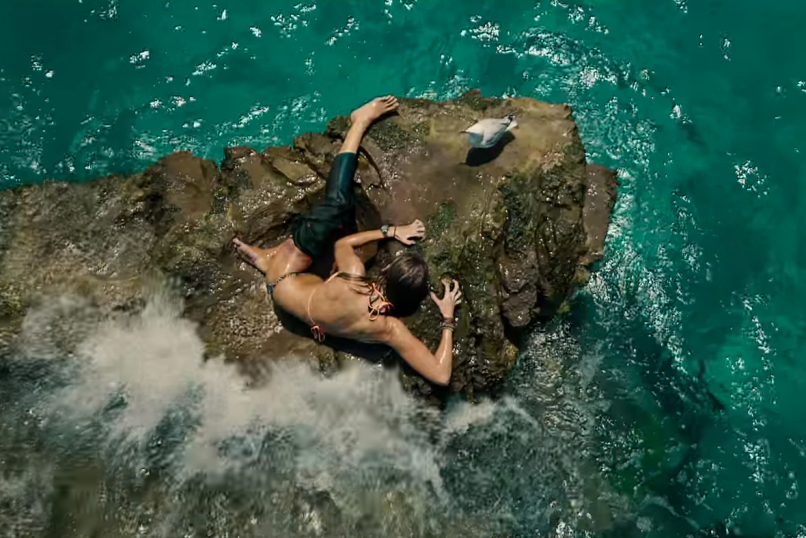 
There have been many shark movies throughout the years, dating back to Jaws, which made the genre a hit and help shape the way we perceive summer movies.  Now, The Shallows seeks to add it's name to the list.

The Shallows is the story of Nancy (Blake Lively) as she looks to surf at a secret beach in Mexico where her mother once surfed.  However, just before she finishes her first day a shark attacks her leaving her stranded on a rock in the ocean.  From there we watch as Nancy tries to survive and somehow get rescued in the process.

The shark in the film reminds me a lot of the shark from Jaws.  It is relentless, powerful and most importantly, deadly.  This creates a real and believable threat for Nancy, especially after her first run in with the shark.  Nancy herself is also very interesting as the movie focuses only on her and nothing else which is good because it helps increase the tension that the movie is trying to convey.  Blake Lively gives a very convincing performance that reminds me a bit of Leonardo Dicaprio from The Revenant.

All that being said, the movie has some very big problems that I couldn't overlook.  Going back to the shark, despite the fact that the shark is shown to be extremely ruthless and powerful.  We see it kill many and even see the carcass of a whale that it had managed to kill.  So with all this evidence from the film there should be now way that Nancy should have survived the initial encounter.  In fact, the wound that she received seemed trivial compared to what the shark shows it is capable of.  And because of that it makes the entire thing feel forced and fake.  The movie also threw in a couple of extra sub plots that went nowhere and added very little and had very little payoff.  Speaking of payoff, the ending felt rushed and was really kind of terrible.  It sought to wrap up the sub plots and just felt disconnected from everything else.  My final real criticism is the run time.  The Shallows is a brisk 87 minutes long but I swear the gratuitous amount of slow motion added at least 10 minutes to the movie.  Because of it the movie felt too short and lacked substance to carry it through, even if the slow motion was impressive at times.

In the end, The Shallows is a good venture into the survival genre.  The tension feels genuine and the shark poses a real, if at times unbelievable, threat.  However, with every step forward it took the film took an equal step back.  However, this is a movie certainly worth seeing, either in the theater, or through rental.