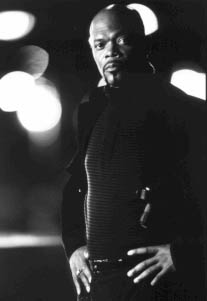 Shaft is back and he's still "The Man."  Good cops, bad cops, drug-crazed low lifes, racists killers and a whole lot of action are packed into John Singleton's new film.

With shaved head, dark glasses, black leather and plenty of attitude, Jackson is the epitome of a man you don't want to cross.

Shaft comes up against a spoiled rich kid (Christian Bale - American Psycho) with a mean streak.  He beats a black man to death, outside a bar, and then goes back to finish his beer.

Toni Collette (the mother from The Sixth Sense) plays a waitress who witnesses the event while outside having a smoke.  When the killer spots her, he threatens her life if she tells the cops; so she rushes home, packs up and leaves town.

Shaft has to find her before the killer does, so she can come back to testify.  But it's a bigger task than he bargains for because Bale gets help from Peoples (Jeffrey Wright), a drug pusher who knows everyone and everything going on in his neighborhood.  Peoples is an interesting character, who wants to spread his drug business to a classier clientele in one scene, and in the next, he's cuddling a sleeping baby in his arms.

Shaft works mainly because of the characters.  The bad guys have well defined personalities, they don't just show up to kill a couple of people and then fade into the background.  Peoples, who calls himself that because he believes he is a "man of the peoples", is complex and often comical.

Singleton uses levity throughout the action and violence is broken up with some humor from both Peoples and Shaft's partner, Busta Rhymes, whose car takes quite a beating during an exciting car chase.

The film has a better than average story and the richly drawn characters gives Shaft a new and entertaining life.