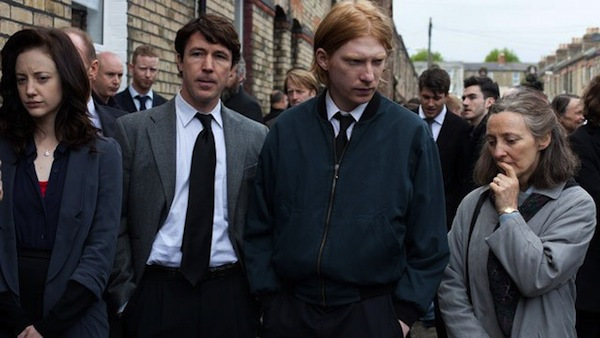 
Intertwining politics and family with unnerving grace and steady precision, James Marsh's Shadow Dancer has a gliding minimalism that may only attract a more discerning audience. Its name derives from a code name given to a file of an incident gone terribly awry.

A slow-burn thriller set mostly in 1993 Belfast centers around IRA operative Colette (Andrea Riseborough of Oblivion and W.E. where she played Wallis Simpson). After an aborted London bombing, Colette acquiesces to MI5 agent Mac (Clive Owen of Killer Elite and The International) who has had her under surveillance. Being with her son (Cathal Maguire) and avoiding a long incarceration means that she has to do sleuthing on her mother (Brid Brennan) and militant brothers (well played by Aidan Gillen and Domhnall Gleeson given the size of their roles as well as Brennan's) at home.

A measured complexity takes hold as IRA nerve-wracked boss played by David Wilmot suspects a mole and Mac feels a kind of devious discomfort from his icy, clandestine superior (Gillian Anderson). The filmmaking and narrative has a more pronounced interpretative feel to it that may feel too sluggish and jejune to some. Yet, for those willing to dive (read: concentrate) into the elliptical espionage (ala Tinker Tailor Soldier Spy) and Colette's haunting milieu set up in a prologue where she was supposed to do an errand for her father it proves bracing with dark, poignant underpinnings.

If Owen's Mac is too bound by his dogged professionalism, there is a fine cat-and-mouse with Colette as presented by scenarist Tom Bradby (once a Northern Ireland correspondent) from his own 1998 tome. Even between some violent flare-ups, there is a tendency that the characters and the material as a whole is somewhat restrained to make it all more puzzling than truly intriguing.

Nevertheless, Marsh works quite well with his craft contributors to avoid a pervasive slickness to the proceedings so often seen in Hollywood bombast. Through a subtle, deft approach which includes angles of framing and lighting it allows Riseborough (often seen to tantalizing effect in red outfits) to endow Colette with subtle, yet oddly compelling ambivalence.