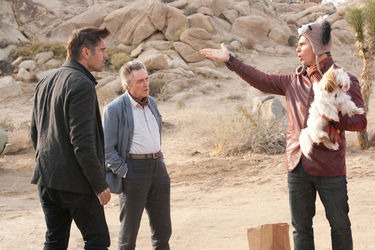 
Colin Farrell is under the direction of Irish playwright Martin McDonaugh in the perkily profane and self-reflexive L.A.-based Seven Psychopaths. Something that gives spirit to the nature of writing and where it can go. The result may not engage mainstream onlookers in establishing some stylized 'film-within-a-film' sequences.

Farrell's self-effacing imbibing scenarist Marty pilfers for the eponymous empty script while  making his girlfriend (Abbie Cornish) testy about his attitude and lifestyle. Sam Rockwell's Billy is the hot-tempered thespian who pushes Marty on the script while moonlighting as a con-artist in a dog-nabbing venture with faithful cohort Hans, a shifting, amusing Christopher Walken, whose cancer-recovering wife is benefitting from the 'reward' money.

This pungent neo-noir gets more hairy after sadistic underworld Charlie Costello (Woody Harrelson) has his Shih Tzu grabbed by the gawky Billy and Hans with Marty in tow; there's something about the wildness that ensues that could benefit his struggling project with a little luck, of course.

Some of the unusual line readings are admittedly clever and play well into some laugh-out-loud moments with lurid antics especially appeasing Quentin Tarantino aficionados. Amusing cameos help fill out the eponymous identities that often effectively satirizes the way conventions and violence are depicted in the current system.

The performers aim to entertain with Walken making the most of his deadpan schtick and Rockwell appropriately over-the-top while Farrell (Total Recall) gracefully slides into the 'straight-man' role. Seven Psychopaths is inspired by the vagaries of everyday craziness to capably realize what it takes to make the battle more than ill-fated.