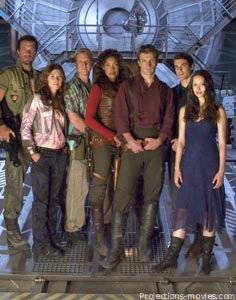 
Based on "Firefly," a TV Sci-Fi series that was canceled in 2002, this space western is witty and entertaining.

Created and directed by Joss Whedon ("Buffy The Vampire Slayer"), the film is set 500 years in the future. It follows a ragtag team of thieves who travel between the galaxies looking for their next job.

Bouncing around in a patched up space craft that resembles an enormous steel grasshopper, the five person crew is headed by Captain Malcolm Reynolds (Nathan Fillion).

Armed to the teeth, the crew can take care of themselves, but they stir things up with the Alliance Government that controls the planets, when they hide 17 year old River (Summer Glau), a psychic, and her brother on board ship.

The Alliance dispatches a sadistic assassin (Chiwetel Ejiofor) to retrieve River and kill anyone who gets in his way. The government experimented with River's brain, and now wants her back before anyone finds out the secrets her mind retained.

Besides the cutthroat officials, there are cannibalistic monsters out after them, plus River, who can be a sleeping waif one minute and a karate chopping killing machine the next.

Fillion is squared-jawed, handsome and makes a great hero. His nemesis is also a figure of note. He has a striking physique, a perfect accent and can break your back like a twig.

The dialogue is straight out of the Old West. The only complaint is that the crew has so little to say or do, as Fillion and Ejiofor have the most screen time.

Fortunately, we don't have to have seen the original series to enjoy this offbeat film. There's a lot of humor, some pretty good fight scenes and enough sci-fi action to please the biggest fan.