The Secret of Kells 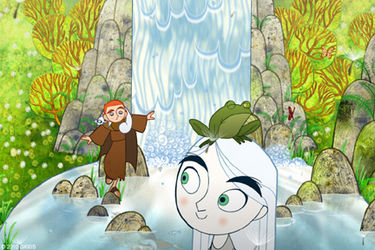 
This well-wrought fantasy tale behind the famed Book of Kells didn't win Best Animated Feature, but it deserved to be in the company of those like Coraline and the winning Up maybe upsetting those wishing that ones like Cloudy With a Chance of Meatballs and Ponyo were included. Unfortunately, it well probably have a short screen life before opening up a bit in ancillary markets.

The Secret of Kells has an animated nostalgia to it, produced in Belgium and France, working noticeably well off of Celtic history and mythology, engaging for those who've been enamored with the likes of The Triplets of Bellville. Directors Tomm Moore and Nora Twomey do some digital tweaking to what is illuminated in hand-drawn style from the Middle Ages to a certain illuminating, mystical effect.

The main figure in what will likely draw in more of an older than intended younger crowd is Brendan (voiced by Evan McGuire), a pre-teen orphaned apprentice at the Irish Kells monastery. Brendan's disciplinarian uncle Abbot Cellach, a hardy Brendan Gleeson, is constructing a solid barrier against advancing Vikings (who are featured in the fun upcoming animated How to Train Your Dragon).

Brendan is really into the arty manuscripts. The nicely obscured tale, which may distance some, sees Brendan trying to help a Scottish illustrator (Mick Lally) with jewel-case four gospel book in need of more drafting by going into the forest for berries.

Some of the "action" in this charming adventure which may be too intense for tots includes Brendan with a powder fairy of a wolf, Aisling (Christen Mooney) and other creatures with the onslaught of Vikings imminent. But, through the interesting, if intended flattening out of what appears hardly two-dimensional, there is much imagery to feast on, not the least of those touched by Celtic and Irish heritage.