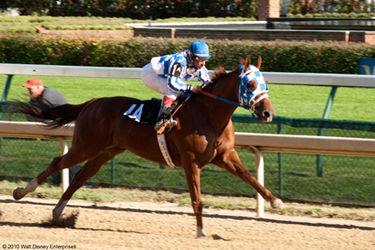 
There probably have been more than a hundred films about horse racing, I stopped counting at seventy.  Only two stand out in my mind, the 2003 Seabiscuit and this 2010 Secretariat.

Seabiscuit carried some of the story through the lives of the characters, but Secretariat  brings us into the life and life style of a woman from the early seventies in America.  Pancho Martin (Nestor Serrano) who owns Sham the challenging horse is played as a sexist insulting male, far beyond the reality of what truly happened, charges at Penny Chenery (Diane Lane) indicating she is a housewife with limited racing and horse managing skills.   He is the caricature of what is happening not so overtly to Penny as she takes over her the family business, raising race horses.  She also faces opposition to saving the farm from her brother and her husband.

It's easy to forget that clubs for men would not admit women not so long ago, she had to crash one to make her first move and it works. Penny also fires a questionable trainer and hires Lucien Laurin (John Malkovich) to do the training of Big Red who ends up being called Secretariat.  Malkovich has us convinced that his Lucien can't help but spit out french quotes when things get tough and when he wants to make a point.  His wardrobe is fun colorful and telling but he becomes a believer while following his new boss' determination.

Early on we find ourselves in sympathy with Penny with help from a very effective performance by Margo Martindale, Miss Ham-the secretary.

Penny doing research learns and calculates which is the best of two colts she might end up with by searching breading lines far back and looking for the two strengths needed to win, speed and endurance.  When she looses a coin toss to Ogden Phipps (James Cromwell) she is the only one who believes she has won.

When I interviewed Diane Lane a few years ago we spoke of the limited nature of modern films in terms of parts for women.  At one time films about and for women had a large presence in films, We both determined that more of those films could come again and be very interesting and compelling to watch.  Diane has this film to fit right into that category along with Under the Tuscan Sun and recently Sandra Bulloch's  The Blind Side followed a strong determined woman who would not give up.

The warmth and sensibility of the film and Ms Lane's performance fold this film into a must see category.  I admit it is far better than expected.  Having seen so many of the past horse racing films it was difficult to expect this wonderful human story swirling around the action of what many believe is the greatest racing horse of all time.

We are invited to follow the excitement of the race and the everyday life of a family somewhat challenged by mom's new job and the fact that she must live part of her time away from their Colorado home.  Reality here challenges what a script would produce, which probably would have the family disintegrate and separate, but this family held together and found pride in mom's accomplishments even when they knew she was taking a chance with their financial future.

It's worth cheering about.