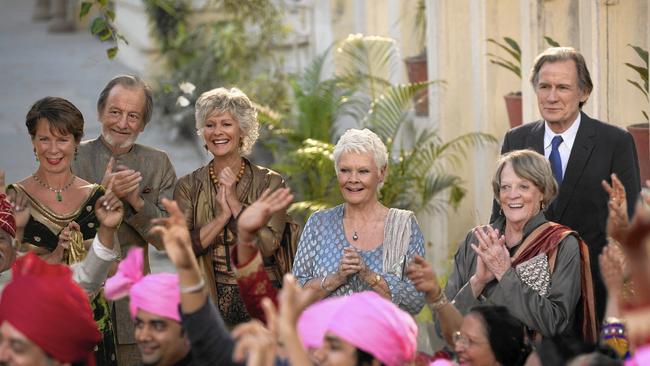 
The colorful production and striking locations in the sequel to the successful 2012 film (from a Deborah Moggach novel) set in India (except for San Diego at the outset) is more ambitious, even bustling than purposeful. Think travelogue it's intermittently entertaining, watchable terms diminished by a hackneyed, farcical on the surface simplicity that finally transforms skepticism and wistfulness into a certain affecting levity.

Many will find The Second Best Exotic Marigold Hotel to contain an appealing emotional sweetness and gentle truths from its mostly mature, aging ensemble (except for Dev Patel also in the politically felt science-fiction yarn Chappie) with new intriguing additions in Richard Gere as Guy and a younger, enticing Tamsin Greig as Lavinia, less so from a discreetly used and reliable David Strathairn (finally checking on his 'investment'). John Madden's film is an unhurried, if stilted amalgamation of farce, melodrama and slapstick that may not really coalesce from a predictable, underdeveloped script by Ol Parker set over a few pivotal days in Jaipur continuing the complications from the "outsourcing" of retirement.

Maggie Smith's sympathetic but pallid (in terms of what the stylists and fashion contributors have done for her) managing Muriel and Patel's entrepreneurial Sonny are looking for ways to expand the hotel/former eroding guesthouse (for the elderly and beautiful) while the latter is preoccupied with beloved fiancee Sunaina (a quite pretty Tena Desae) and their upcoming nuptials. Of course, Sonny and Sunania have their share of pre-marital discomfort as signified by an early Skype session.

Norman and Carol (Ronald Pickup, Diana Hardcastle) have issues with their relationship which doesn't unfold with much interest as does the one involving Gere (a somewhat mysterious lovelorn tourist thought to be an inspector) and Greig that underlines the blase nature of the storytelling. Better is Judi Dench's clothing purchaser Evelyn (who's very close in age to Muriel who she shares a little amusing patter) in a bit of pickle with professional possibilities as feelings for tourist guide Douglas (Bill Nighy, having some nice line readings even with a little ad-lib from an earpiece while regaling Alfred Lord Tennyson) heighten just as his contumacious, distant wife (Penelope Wilton) happens to turn up. Then, there's the unrewarding role for Celia Imrie as Madge beckoned on by many beaus which is too prolonged and apparent to say the least.

The churlish consternation of Sonny doesn't provide Patel with the kind of preferred restrained charm he previously had as the filmmaking has more international pull especially with the appearance of a tentative Lillete Dubey as Sonny's mom on the eve of his big day (who is reluctant to accede to the advances of Guy who shares a similar predicament with her) . Strathairn's hirsute  inspector helps create more tension, but serves mainly as a plot device, as the threads from Parker really doesn't coalesce as well as he previously did. Even if Dench, Nighy, and especially an acerbically sincere Smith offer more substance to scraggy roles which goes to show how polished they are in their craft to make their particular dynamic appealing enough.

Madden and Parker still handle the triteness and various familiar strands smoothly enough even when compared to its less counterfeit, overwritten, more focused predecessor. The Second Best Exotic Marigold Hotel is probably too warmed-over, hit-and-miss (sometimes in a good way), and unrefined. Nonetheless, it has a way to please its demographic in a starry, engaging way around dilemmas and romance with some welcome high-stepping, contagious Bollywood exuberance to boot.