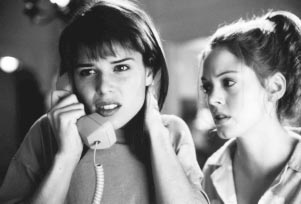 Wes Craven, creator of the Nightmare on Elm Street films, directs a new group of frightened teens as they try to escape a mad slasher.

Drew Barrymore displays ten different emotions in the first ten minutes as the first victim.  She's alone in her parents' home when the phone rings and a stranger tells her that if she correctly answers trivia questions about old horror movies, he will spare her boyfriend's life.

The other teens who are stalked are self obsessed goons, interested only in partying and sex, and the police are portrayed as incompetent boobs.

The one teen with some sense is Neve Campbell (TV's Party of Five) who stars as the young innocent.  She's stalked by the psycho for most of the film, but by using her ingenuity, she escapes.

The killer, dressed in a long black cape and skull mask, uses a knife, the weapon of choice for most slasher madmen, so there's plenty of maiming and gobs of oozing blood around.

There are some laughs among the screams, but I'm still not sure if all of them were intentional.  Craven goes for cheap thrills by using loud music just before someone jumps out of the shadows, and even stoops to having a cat screech in a dark room.

Henry Winkler has a cameo as an uptight high school principal and Courtney Cox plays an overbearing tabloid reporter looking for a Pulitzer Prize winning story (unfortunately, she won't find one here).