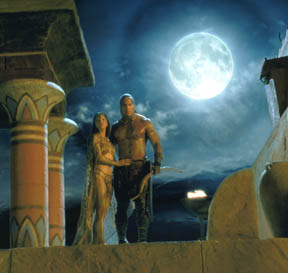 Imagine a cross between Indiana Jones, Conan the Barbarian and The Mummy Returns and you'll have a good idea of what to expect from The Scorpion King.

It stars Dwayne The Rock Johnson as the hired assassin Mathayus.  From a clan of professional killers, Mathayus takes the assignment to kill the clairvoyant sorceress Cassandra who has helped the warrior king Memnon dominate and destroy his foes.

Soon the plan to kill Cassandra (Kelly Hu) changes and Mathayus is captured.  Buried up to his neck and soon to be lunch for huge fire ants, Mathayus befriends a bungling thief and manages to escape.  Determined not to fail his task Mathayus returns only to kidnap the sorceress so that he may face the evil king Memnon and exact his revenge.

Sorceress Cassandra it turns out was not a willing assistant to the evil king and soon begins to aid our hero.  The scenes of the battles are intense and the sword play adequate.  What is best is the dry humor and physical humor displayed by The Rock.  Many will compare him to Schwarzenegger and are justified physically, but for screen presence, Arnold loses.  Compared to Conan, The Scorpion King has defiant look and attitude - never defeated.

There are the obligatory battle scenes and even a love story, but watch for the pieces from other films: the huge gong used for an escape as in Indiana Jones and the Temple of Doom, the sword manipulation of Conan and sets reminiscent of The Mummy.  Though a bit slow in places, this film works because it makes no pretense of being theater, only entertainment.  It is with that guarantee of entertainment that you know good wins out over evil and love triumphs in the end.  This could easily play as a 1950s western or war story - only the costumes would change.

In short, enjoy the fun and expect to see more of what The Rock's been cookin.