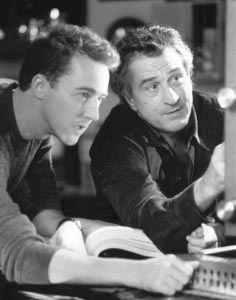 There's nothing better than a good heist movie, and this is one of the best.  The plot is intricate and involves you in all of the details that go into planning a technical theft.

Robert DiNiro stars as Nick Wells, a jazz club owner who steals big ticket items to assuage his lifestyle.  He lives in Montreal and makes a practice of never stealing anything in his adopted country.  But, his friend Max (Marlon Brando), an old crime boss, wants him to do one last "score" which will set him up for life.

Max's inside guy is Jackie Teller (Edward Norton) a young brash upstart who has acquired a job at the Museum where a jeweled scepter is securely kept.  The employees at the building know him as Brian, a sweet assistant janitor with what appears to be symptoms of cerebral palsy.

Under the cover of Jackie's faked malady, he slowly moves about the building, marking down the location of video cameras, noting guard stations and underground access.

Nick is interested in the job, but he's a private guy and used to working alone.  Plus, he doesn't trust Jackie, who compromised Nick's privacy with their first meeting, by introducing himself in front of Nick's home.

But, against his better judgment, Nick agrees to go ahead with the heist.

What follows, is a step by step plan of what it takes to pull off the theft of a highly guarded antiquity.  An elaborate underground tunnel map is made, a building schematic is drawn and a supposedly impenetrable safe, has to be figured out.

To make things worse, their plans have to be altered as the museum increases the level of security when they realize the real worth of their treasure.

Edward Norton holds his own with his legendary co-stars.  Brando's sly and a bit mischievous character is delightful, and DiNiro's experienced, streamlines, no-nonsense thief is all business and a study of control; in stark contrast to the younger, impulsive, swing-from-the-hip Jackie.  It's a powerfully interesting trio.

The male actors fare better than Angela Bassett however, whose talents are wasted in a throw-away role.  She plays a flight attendant and DiNiro's love interest whose in and out of a scene faster than the airlines can lose your luggage.

Director Frank Oz, best known for his association with the Muppets, does a great job keeping the story moving at a deliberate pace, slowly building suspense.  There aren't any thrills or special effects or big shoot em ups, but an involving and smart film with three absorbing performances.