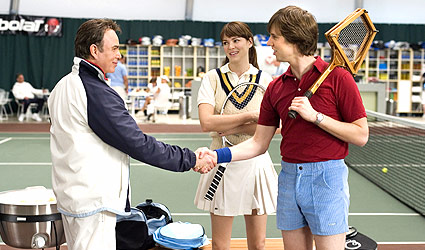 
Director Todd Phillips follows his funny Old School with this choppy comedy. Billy Bob Thorton stars as Mr. P, an instructor who teaches men how to be aggressive and stand up for what they want in life.

Jon Heder (Napoleon Dynamite) again plays the nerd as Roger, a New York parking meter attendant who enrolls in the class. The mild-mannered Roger is desperately in need of a hefty dose of confidence, but he might not be ready for Mr. P's abusive assistant, played by Michael Clarke Duncan, whose mere size makes him someone to be reckoned with.

School for Scoundrels does have a few laughs and Ben Stiller and Horation Sanz provide some. Thorton and Heder do a decent job with what they are given. They have played similar stuff in the bast. But just when the script starts to get funny, it turns excessively mean and just in case we missed it the first time, it's repeated over and over again.