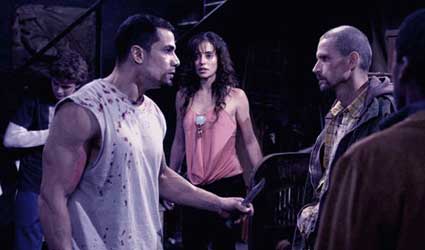 
Apparently, with the surprise success of Saw, a new horror franchise has been born, a grisly and sadistic one.

Saw II, of course, arrives in time for Halloween, for viewers to be at the mercy of a monstrous serial killer revealed as Jigsaw. The end of the film's ads includes the line "Oh, yes, there will be blood."

If a picture can be twisted, yet creative, here is one that works off of diabolical traps, far better than Mindhunters. Filmmakers have asked that the script's guarded surprises not be revealed "to protect the experience of future viewers." That's easy to do given the urge to make someone extremely squeamish.

Coiffed almost as a paper-mached carnival figure via prosthetics and make-up to camoflage his deteriorating cancerous condition, Jigsaw wants his latest potential victims to appreciate their lives. Many will be happy with the bloody start before the opening credit scrawl, as one tries to gouge out their eye to remove a surgically-implanted key.

The soft-spoken killer is apprehended soon thereafter by hard-working, jaded detective, Donnie Wahlberg's Eric Mathews, along with comely partner Kerry (Dina Meyer, also in the original). Mathews' son happens to be in Jigsaw's nefarious moral compass of a game, as he taunts the detectives with a weak live video representation of eight people. Now, Mathews is impelled to enter something sick, if somewhat ingenious.

Making the torment as palpable as necessary, as the story changes direction rather drastically in the later going is aided in part by production designer David Hackl. Jigsaw's decrepit lair looks like a crack-addict's residence, and the wickedly unsavory sets has the hopeless folks trying to figure out the mysterious clues. The camerawork by David Armstrong imparts horrific desperation as first-time director Darren Lynn Bousman lets the plot and characterizations find their place.

Besides Wahlberg, the cast isn't that prominent, maybe with the exception of "7th Heaven" Lucy Camden actress Beverly Mitchell as Laura. Shawnee Smith is back as one of the possible victims, Amanda, who doesn't get along with ex-con, thuggish Xavier (Franky G of Confidence).

Perhaps what benefits this trangression of the genre is the bent into the mastermind as fleshed out prominently by Tobin Bell. Bell does enough to make the psychological input reasonable given the mayhem and Grand Guignol that exceed orifice gratuitousness on many levels.

Bousman, along with co-writer Leigh Whannell, also a writer and co-star of Saw, take advantage of all of the gory potential, not really drenching the characters, in a medieval way. Hardcore and torturous, Saw II lives for its unhealthy sharp-minded main character, perhaps a devious disciple of Freddy or Jason. Though the shadow of its predecessor lurks throughout the dangerous ruses, maybe the next edition will make for a more frightful tale of survival.