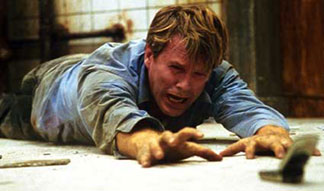 For Halloween this is another violent, sadistic film resembling Seven and the life-or-death game Cube. Saw will probably appeal to fans of last year’s Texas Chainsaw Massacre with its disturbing, fiendish backbone.

The script by Leigh Whannel has two men, Adam and Dr. Larry Gordon, played by Whannel and Cary Elwes inexplicably chained to pipes on opposite walls of a revolting restroom. There are clues in there, including a body soaking in a pool of blood, as they start to sort it all out.

The direction by James Wan includes flashbacks that delve more into the mastermind of this grisly situation which shoehorns two cops acted by Tony Leung and Danny Glover who are investigating horrific deaths of a serial type.

The dark, quite grainy approach leads to eerie revelations amid its characters who are extremely flawed folks. The interaction between Adam and Dr. Gordon wouldn’t seem to have much going for it but in a clandestine, untrusting way, Whannel and Elwes (playing against type), often make it work. Their dire predicament has similar consequences for the doctors wife (Monica Potter) and daughter (Makenzie Vega) if instructions aren’t followed.

Wan ratchets up the ominous, murderous trickery to levels streamlined with wit from Whannel’s narrative. The result will often make one shudder, even when scenes keep the worst off screen. Saw sickeningly has a hold on an audience and aims to thrill with deft strokes of blood and mystery.