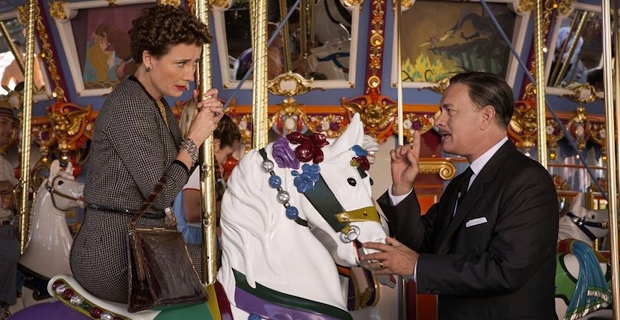 
A dramatic comedy based on a true (behind-the-scenes) story that is swooped up in studio spirit and advertising still is more well-rooted than an overdone brew of sentimental swill and in-jokes. One that hopefully will have young and old drawn in enough to revisit (or recall with fond memories) an old classic which launched the career of Julie Andrews.

A splendid Emma Thompson (Brave, Men In Black III) and Tom Hanks star in John Lee Hancock's Saving Mr. Banks which chronicles what it took to have Pamela (PL) Travers (a finely nuanced Thompson) sign over the rights (after beset by financial woes) to her beloved novel Mary Poppins.

Hanks's movie mogul Walt Disney went through plenty after dealing the prickly, demanding novelist as the tale's present is 1961 after two decades of pleading with her. Pamela wanted to retain final script approval and expressed that no part of any adaptation would include animation. Her veto power included working with the scenarist (Bradley Whitford) as well as the composers (Jason Schwartzman and BJ Novak).

The pliable scripting from Kelly Marcel and Sue Smith has Pamela taking on the folks at the House That Mouse Built with acerbic awkwardness that include humorous one-liners in a colorful Los Angeles. Hanks (in top form in Captain Phillips) limns a twinkly offensive charm to an otherwise perceptive businessman trying to understand why an imperious, no-nonsense Pamela is giving everyone a headache.

Interspersed with Travers and Disney (through the shrewd editing by Mark Livolsi) in Southern California are flashbacks to Australia in 1906 which has a pulchritudinous  stand-alone quality about it. A young Pamela (a solid Annie Buckley) was indulged by her alcoholic father (Colin Farrell, nicely against type) while her mother (Ruth Wilson) toiled hard to keep a good home given her husband's waywardness.

Thompson adds an officiousness to Pamela's odious presence which confers a motif about letting go of the past. It helps to capriciously modulate the mood in a shadowy dextrous way. It helps that Hanks provides a welcome ebullience and determinism to a larger-than-life figure who can be reflective when need be.
Paul Giamatti delivers another reliable secondary turn as Travers's driver as they share an amusingly crotchety rapport.

For Saving Mr. Banks to be consistently entertaining in ways to allow storytelling a compensatory, therapeutic value it must churn with emotional underpinnings in affecting ways as Hancock demonstrated in the Dennis Quaid 'starred' The Rookie. It does in this sensitively handled means to a known end. That includes Travers finally looking at what was deeply connected to her own childhood. With Thompson and Hanks adeptly leading the way the references to a long-in-the-making motion picture has a charming, spot-on quality about it, right down to the proficient production design. And, of course, those fetching songs courtesy of nifty refrains from composer Thomas Newman.