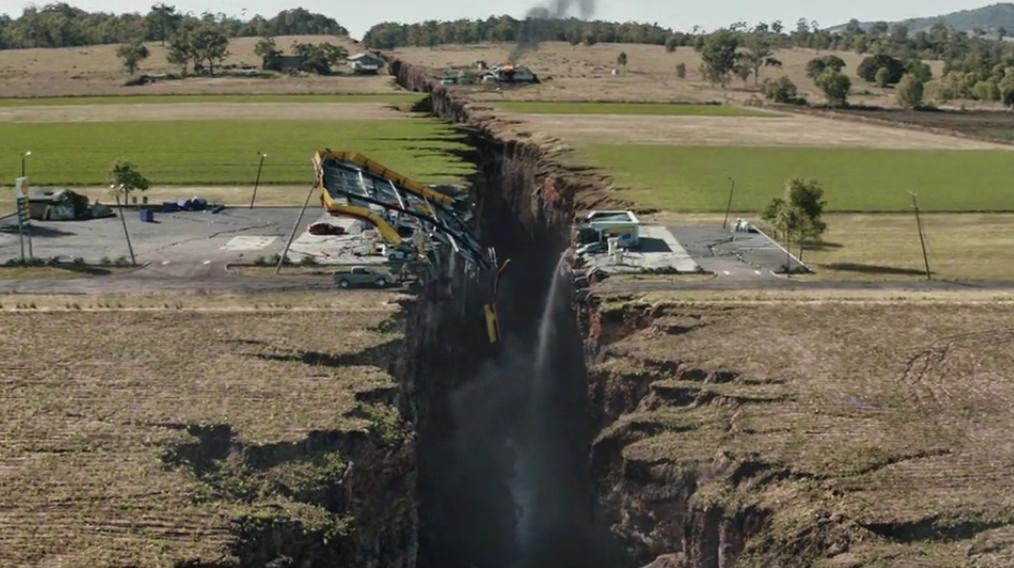 
San Andreas looks like a disaster film in which most of California is destroyed by the special effects folks from Village Roadshow Pictures, but the film is a narrow little story of Dwayne Johnson searching for his daughter on the fault filled west coast.

Even with the gigantic special effects the film feels narrow, there could have been more story lines in a place where nearly ten million folks are in danger as the surface of the Earth buckles and shakes under a 9.6 Richter scale earthquake.

Johnson leaves his station as part of a rescue unit to search for his daughter, nothing else matters, the other millions of folks flounder on the shaky surface.  Of course there is a Tsunami after the various quakes and it just keeps coming filling up buildings that are falling from the vibrations.

The tapestry is far too large for the narrow story about Johnson, his wife (Carla Gugino) and their daughter.  He is not like Humphrey Bogard's Rick in Casablanca expressing that the needs of two people pail in the atmosphere of the dangerous World they live in.  Johnson drops all of his responsibilities and heads off with his helicopter to save his daughter.  On the way he finds and rescues his estranged wife, they steal a truck, and later a boat to reach San Francisco where daughter (Alexandra Daddario) is holding up with new friends (Hugo Johnston-Burt) and young (Art Parkinson).  Young Parkinson brings some humor to the film as he and Johnstone-Burt) save the daughter and later she saves them.

We can't help think, what about everyone else are there some other stories in this gigantic disaster movie?  But we quickly realize this is a Dwayne Johnson hero film, with a very simple story line and far too many special effects which become boring as time passes.

Paul Giamatti brings the only interesting information to the script.  He is the scientist who has discovered (just too late) a method of predicting earthquakes.  He stands on Hover Dam as the initial quake takes down the gigantic structure.  He and his staff at least talk about warning folks about future shocks and how to escape.  He is the only interesting person in the film.  Although the young Parkinson has some of the best lines.

Count how many times we hear: "Are you all-right" or Oh my God," not much work on the dialogue in this production.

This should be the big opening to the summer season, filled with action and a little thought and concern for the extremely significant disaster as it effects a large population.  Rather it's a chance for Johnson to act tough and help his family and to hell with the other Californians.