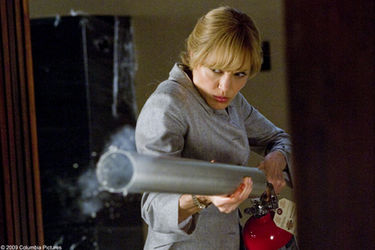 
A risible, relentless rush is the old-fashioned, workmanlike cinematic condiment known as Salt.

Phillip Noyce's labyrinthinine espionage tale has a foreboding efficiency to it and a star in Angelina Jolie whose titular character in Evelyn Salt could be viewed as a cousin of Jason Bourne. Reportedly, Tom Cruise was originally slated to be Edwin A. Salt, but production changes necessitated a kind of Natasha Fatale, allowing the once-huge male superstar to loosen up for the sometimes tongue-in-cheek, if rote Knight and Day.

The storytelling involving dormant "sleeper" Russian spies has been noticed for its resemblance to the recent case of those including one Anna Chapman as the "Cold War" and its paranoia might be making a comeback.

But, senseless action allows a straight-laced Jolie to initially offer an enigmatic presence even though the tagline "Who is Salt?" really is irrelevant for those attentive to the early sections of where her true affiliation lies. 007 afficianados will click into scenes of cruel interrogation in a North Korean jail, and, later, as the action begins to intensify, in an elevator with those knife-tipped shoes.

A multi-lingual Evelyn gets a chance to showcase her lissome side with the help of CIA boss Ted Winter (Liev Schreiber of Defiance) and paramour and soon husband (also well-known arachnologist) Mike (August Diehl of Inglourious Basterds). Jolie takes to the physical demands of a transformiing role very well, almost to the point where she can convincingly don a male disguise.

There are some daring dashes up to the midpoint after aging defector Orlov (Daniel Olbrychski) makes an announcement about Salt being activated to eliminate the Russian president (Olek Krupa) in New York City where the funeral of the American vice president is held (it's noted as 2011).

So, the cathedral at that memorial turns out some unexpected sparks, and later as things get more apocalyptic with more international intrigue, the White House becomes a crucial setting as the real villain (you'll probably guess it beforehand) is divulged.

Even though Salt may seem passe with some cheesy line-readings and effects, it manages to entertain with all of its propulsiveness and energy. Jolie and Olbrychski, a respected Polish thespian, make the most of their roles, while it's more about filling or type casting for Schreiber (not too different from Repo Men) and Chiwetel Ejiofor as dogged counterintelligence agent Peabody.

With all of the "precautions" taken on someone like Salt, grimness and vacuity go hand in hand as there is something inviting to someone who continues to make her pursuers look mediocre at best.