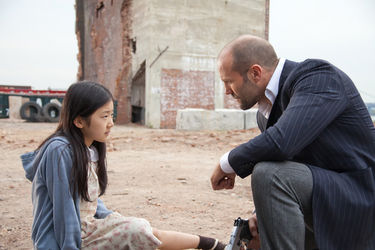 
Jason Stratham is a disgraced cop (he's the honest one) who while making a living as a cage fighter wins when he is expected to lose. Little Catherine Chan is the kid who remembers everything including numbers which the Chinese Mob wants her to remember and the Russian underworld is determined to take from her.

A winning bout he was scheduled to lose puts Stratham's Luke Wright on the street and in the timely subway location where Chan's Mei escapes to. That is the melding location of two strange allies each in danger from elements in society that are powerful and corrupt.

The two run together when Wright saves her from the gang attempting to capture her again. This is one man against everyone else because they are corrupt. The cops in the chase are tied to the underworld and actually accept bids from the Chinese vs. the Russians to turn over the girl for the highest bid.

Stratham appears to be an army of Bruce Willis' clones. He probably kills more dirty cops, and underworld members than folks killed in Bagdad at the height of war. He punches, plummets, shoots, stabs and crushes the bad guys and at times he flies through the air like Luke Skywalker.

The entire production is way above any sense of substance, but the action and heroism of Stratham's character and the strength played into Chan's dialogue are very attractive to watch, particularly to those who like ACTION films. This one has no basis in reality, but it's a lot of fun to watch.

The film is better than the script, which is unusual.