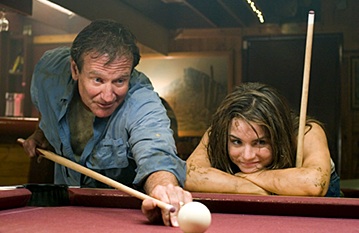 
Robin Williams plays Bob Munro, a soda executive who is forced to delay the family's Hawaiian vacation when his money hungry boss demands he conduct a meeting in Colorado with a regional soda maker ripe for a takeover. Realizing his teen son and daughter are now aliens to him, Bob decides to rent an RV and drive with the family, all the while hiding the fact that he is on a business trip.

Beyond shots of Williams being showered in sewage, the movie features few memorable lines. An example of this is when stopped at a desert RV park, bratty daughter Cassie remarks it doesn't look like Hawaii, but rather "the place where they faked the moon landing," much to her father's chagrin.

During their trip, the Munros meet the Gornickes, a traveling family lead by Dad Travis (Jeff Daniels) and Mom Marie Jo (Kristin Chenoweth). In spite of Gornickes' open and friendly demeanor, Bob and wife Jamie (Cheryl Hines) consider them white trash and do all they can to avoid them.

Naively believing they are not being avoided, the Gornickes always seem to be in the right place at the right time to pull Munro's butt out of the fire again and again.

Near the end of the film Bob rushes back to a campground after a "secret" work meeting. Foolishly he decides to drive the mammoth RV across mountain roads. This supplies the scene on the theater poster, with the RV teetering on a ridge top.

The movie is being marketed with scenes like that but if you've seen the ads you have seen all the funny this film has to offer. What a shame the PG rating held back the comic talent of Williams, had it been PG-13 or better an R the film would have taken on the darkness it needed to be comical.

Kids will enjoy the film but be prepared for 98 minutes of Williams with a gag and blinders on rather than the quick wit and biting tongue he is famous for.