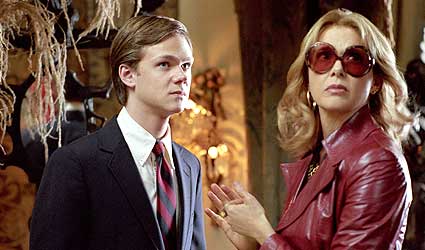 
Writer-director Ryan Murphy ("Nip/Tuck") chronicles a dysfunctional family absurdly flailing away at an audience who may prefer to do what the title suggests after enduring much derisive irrationality.

Working snidely from Augusten Burroughs' memoirs, Murphy's estimable ensemble includes Annette Bening (Being Julia) as a nut-case author mom, Brian Cox (Red Eye) as a zany psychiatrist, and Gwyneth Paltrow (The Royal Tenebaums) in a smaller role as an ardent religious daughter whose character won't make friends with animal lovers. This rapturously painful picture is ironic in "fighting oppression" as viewers may very well express their pain like Bening's Deirdre does for Cox's psychiatrist later euphoric in a moment that ethereally summons "Envy."

Yes, there's "play doctor" and "bible dipping" and an illicit relationship with the Burroughs surrogate (Joseph Cross) and the "adopted" Neil Bookman (Joseph Fiennes) as the onslaught of petty flippany when it comes to recovery, mental health, sexual yearning, and religion is strident, mind-numbing concentrate of comedy. However, for all of the crazy happenings, a coming-of-age poignancy is reached in mostly later scenes with Cross (who went to Trinity College) and kibble-munching Mrs. Finch, a frumpy, but effective Jill Clayburgh, and Bening, whose spastic narcissistic mom oddly became a source of inspiration for Augusten.